Sushi in Japan is a no-brainer, so my first meal in Tokyo was Sushi Tokami in Ginza. This 10-seat sushiya is ranked among the top 10 sushiyas in Tokyo on Tabelog with a rating of 4.36, and holds one Michelin star. The icing on the cake? Chef Sato speaks very good English.

Dinner at Sushi Tokami always starts with Chef Sato’s signature tuna hand roll. The flavorful tuna collar held its own on top of the smoky nori and the boldly acidic rice seasoned assertively with red vinegar. Chef Sato uses only red vinegar for his shari, differing from the more common practice of alternating between white and red shari based on the fish. The strong shari takes some getting used to, but I found that it worked well with the fish for most of the sushi I had that evening.

But let’s not get ahead of ourselves. For the first appetizer, we were served a light and creamy sesame tofu and some salted ginkgo nuts. The chewy texture of the ginkgo nuts and the mild bitterness at the end were sensual and enjoyable.

Raw hirame was wrapped around seaweed, chives, and uni, each showing off the light and elegant flavors of the hirame in different ways.

My favorite was without a doubt the uni, whose sweetness and richness fused seamlessly with the delicate hirame.

I arrived in Japan just in time for the start of sanma season, whose tender flesh and distinctive flavor entice many palettes. Chef Sato propped the sanma against sweet red peppers, and served them with spicy miso, Japanese mustard, wasabi, liver sauce, and grated radish. While I enjoyed the way the melting softness of the sanma collided with the crunchy peppers, the whole picture eluded me, and the variety of different sauces certainly didn’t add any clarity.

Nor did I enjoy the sliminess and fishiness of the Hokkaido oyster. The one I had at Florilège a few days later was so much better. (Review coming soon.)

The smoked mackerel was so salty that it required half a glass of water, but overall I still liked the flavors.

In a much more successful effort, Spanish mackerel was served warm with organic tomatoes and snap peas. The fish had a lingering umami, but it was the tomato that stole the show with its bright and sweet flavors, tasting as vibrant as if it had been picked 10 minutes ago.

For the final appetizer, tender fillets of grilled Wagyu beef, with some wasabi accentuating the lean but flavorful beef.

On to sushis. As I mentioned earlier, Chef Sato uses exclusively red vinegar for his shari. The strong vinegar was a bit overpowering at first – especially for the snapper, which had a very delicate flavor – but became less noticeable once I got used to it.

The texture of the squid was quite enjoyable, but not as impressive as the one I had Ginza Onodera in Shanghai.

The kohada was the first instance where the sharp shari matched the strong flavor of the fish perfectly. The balance continued with the tuna sushis, which is to be expected since tuna is traditionally paired with red shari. 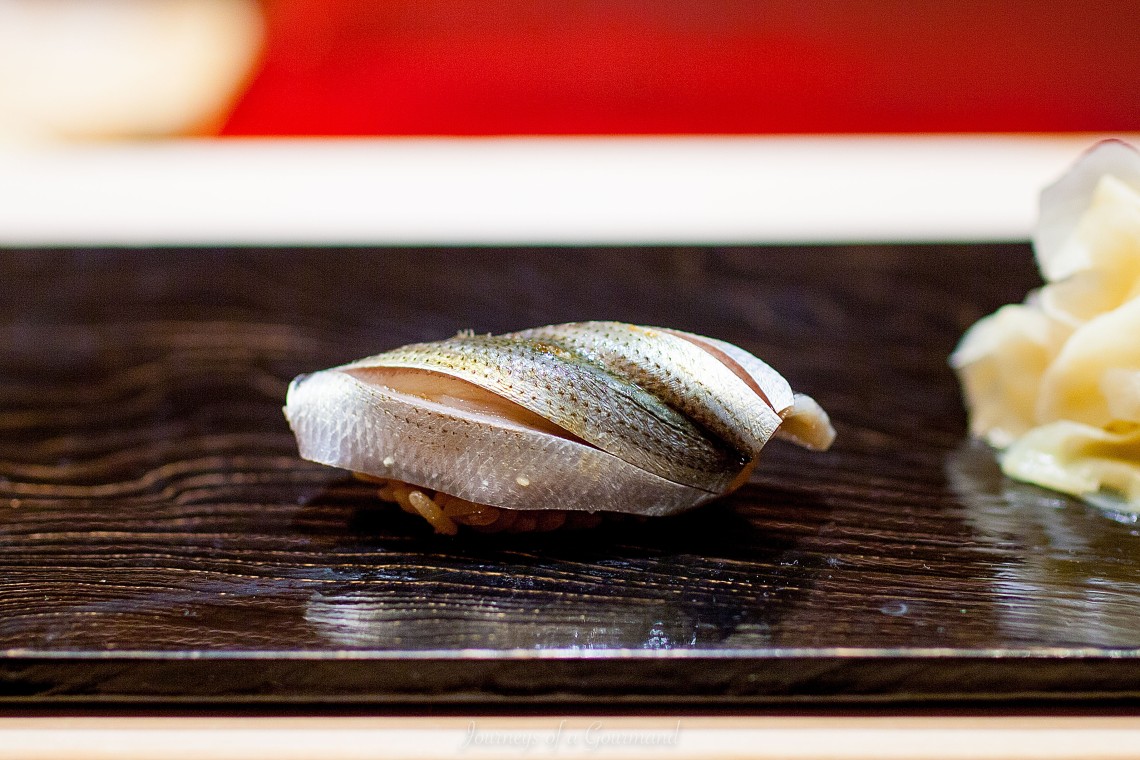 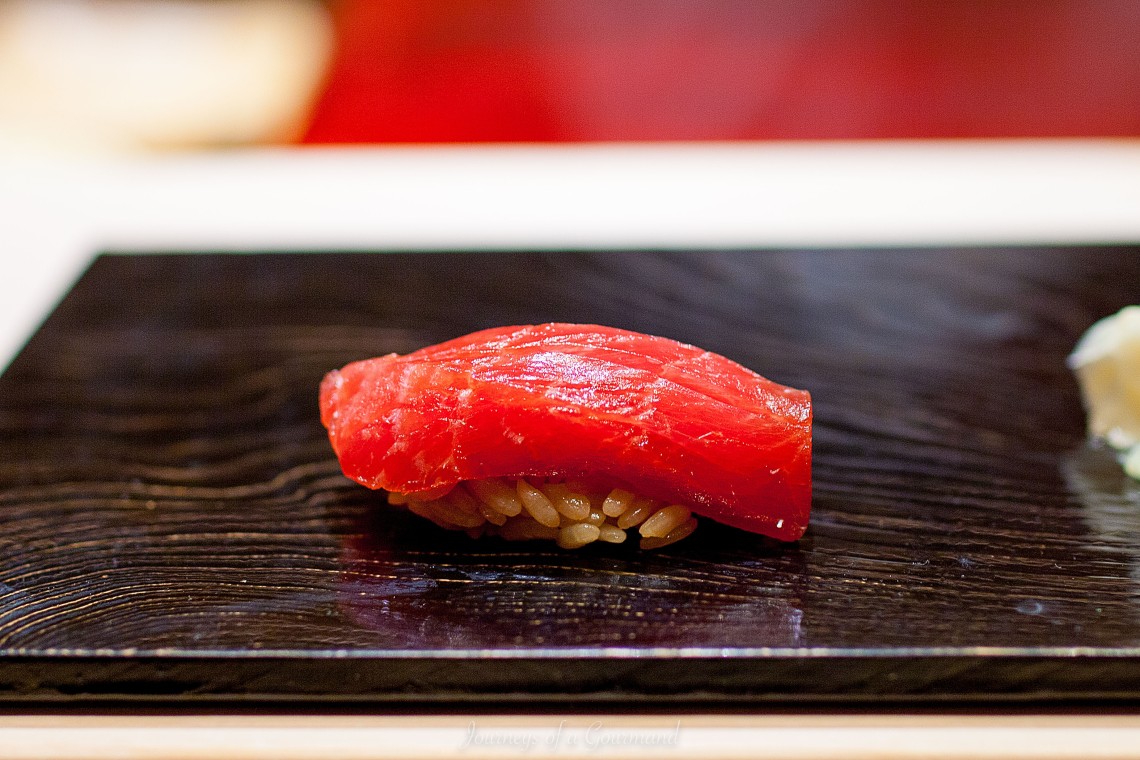 From the chutoro onward, I asked Chef Sato to make the shari smaller for me because I was already starting to feel full. But to my surprise, I actually realized that I liked the sushis better this way, because the smaller shari was less sharp and showed off the fish more. 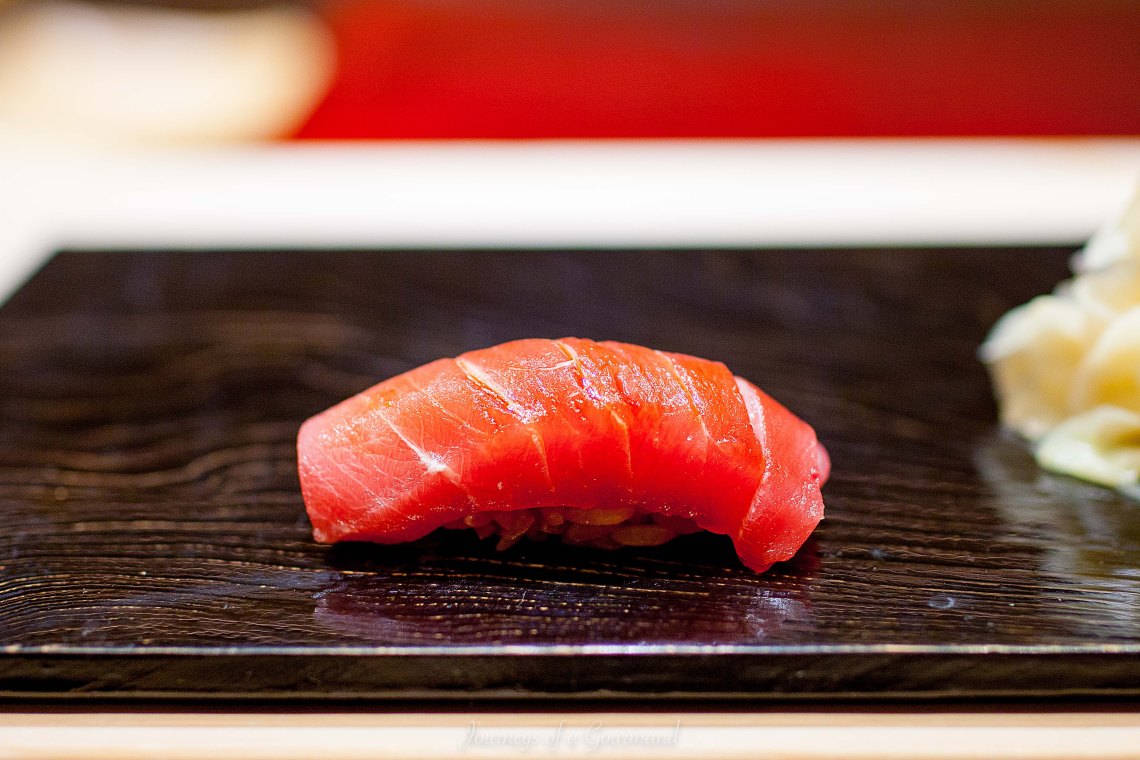 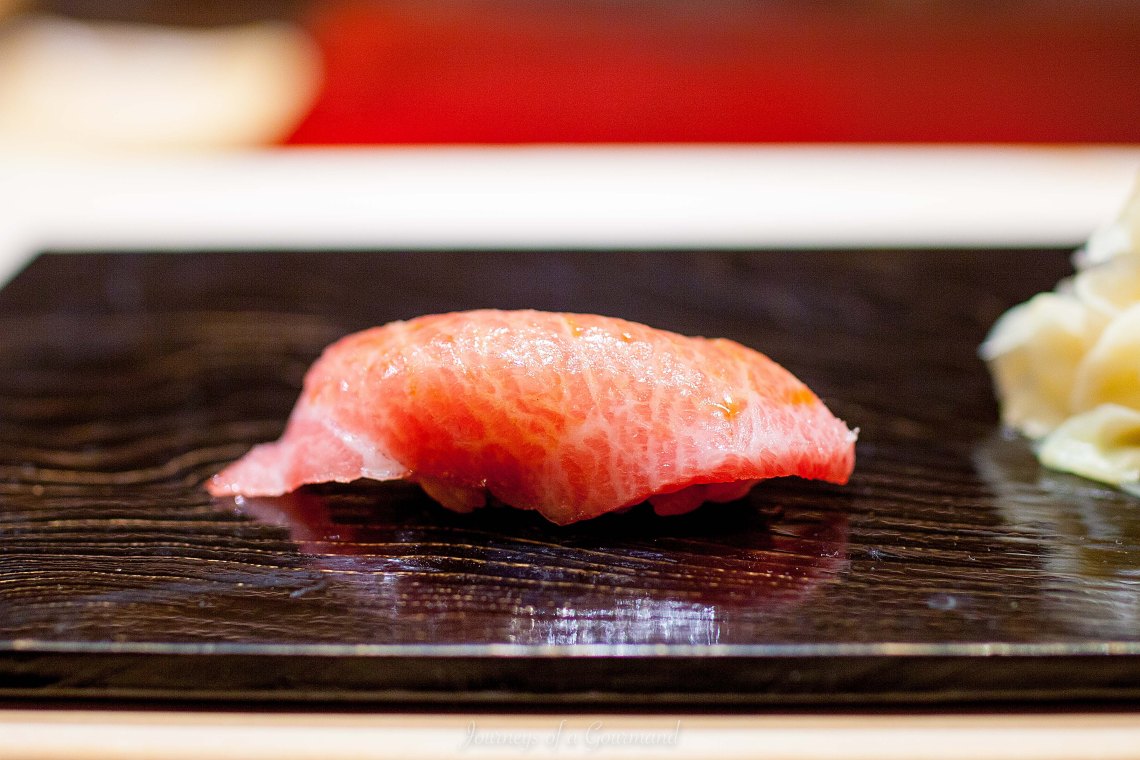 A highlight of the evening, the baby snapper was deliciously tender, while the freshness of ikura drew an interesting contrast with the dark and slightly bitter nori. 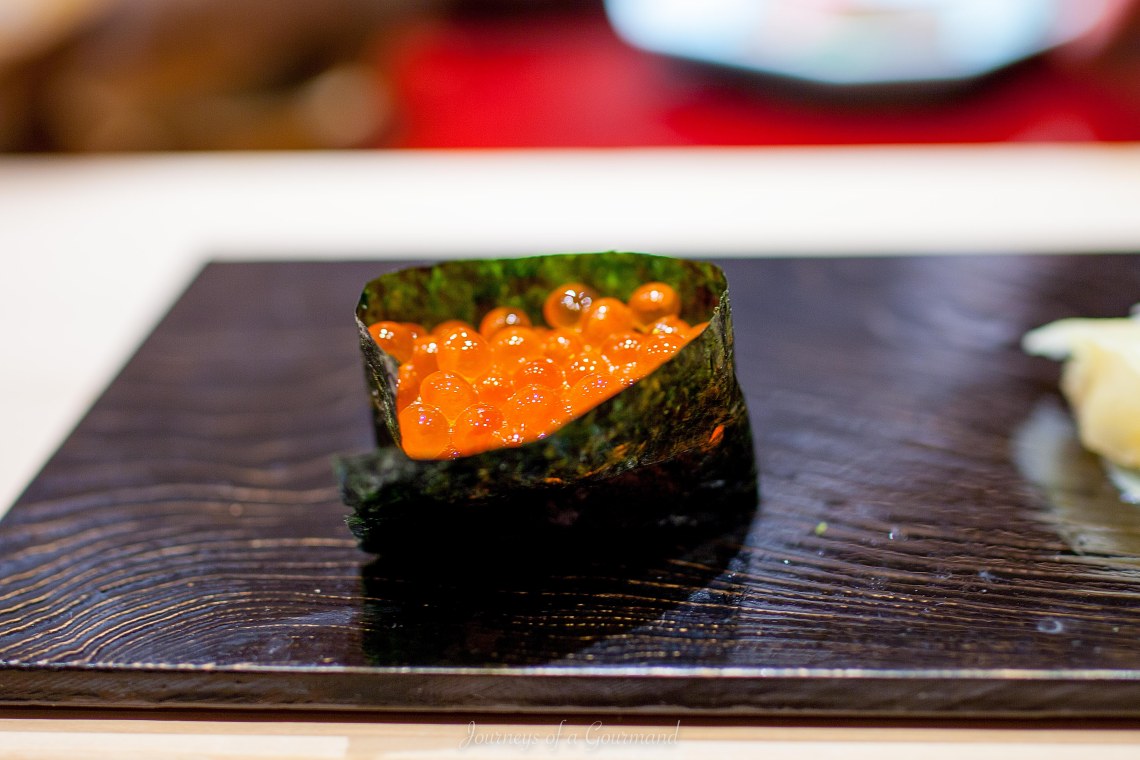 The kuruma ebi was another highlight. The balance between the sweet prawn, sharp wasabi, and tangy shari was simply spot on.

Kombu marinated kisu had a lovely umami, while flavorful and meltingly tender sanma left on its own was a true delight. The sweet hamaguri bore an interesting texture. 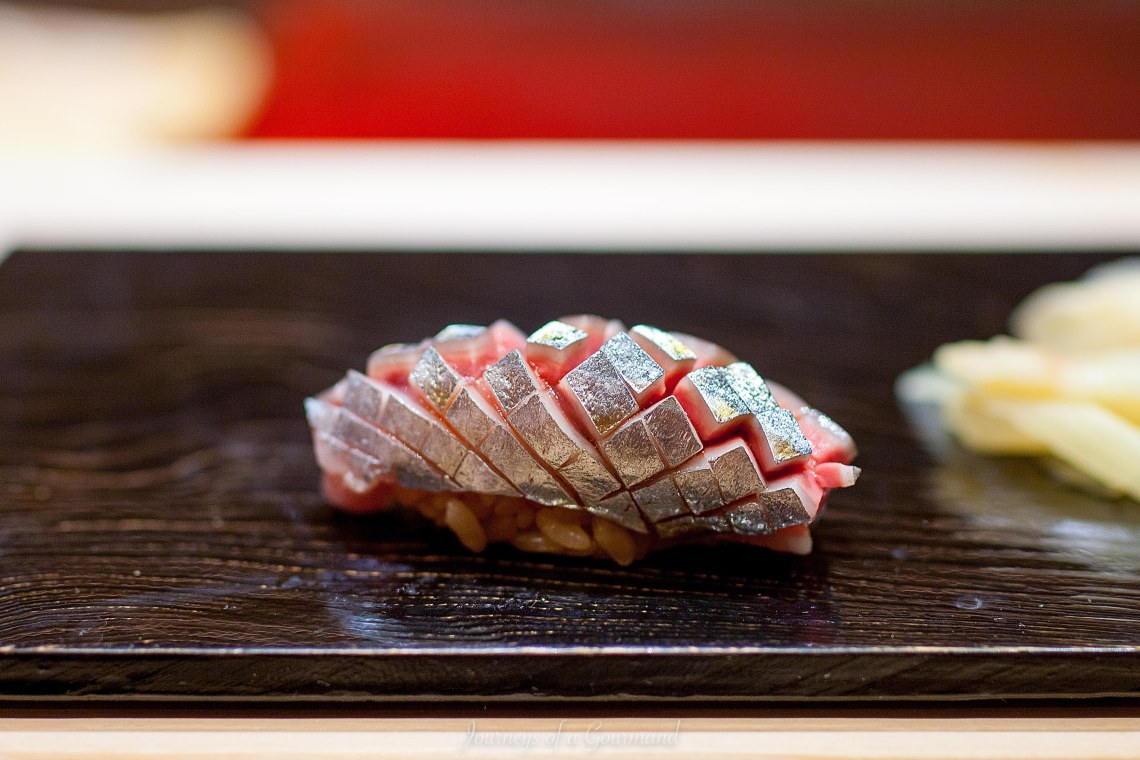 Chef Sato made the uni sushi using both warm and cold uni. The difference in temperature made for an uncommonly intense experience. The sumptuousness continued with the rich and fatty nodoguro. 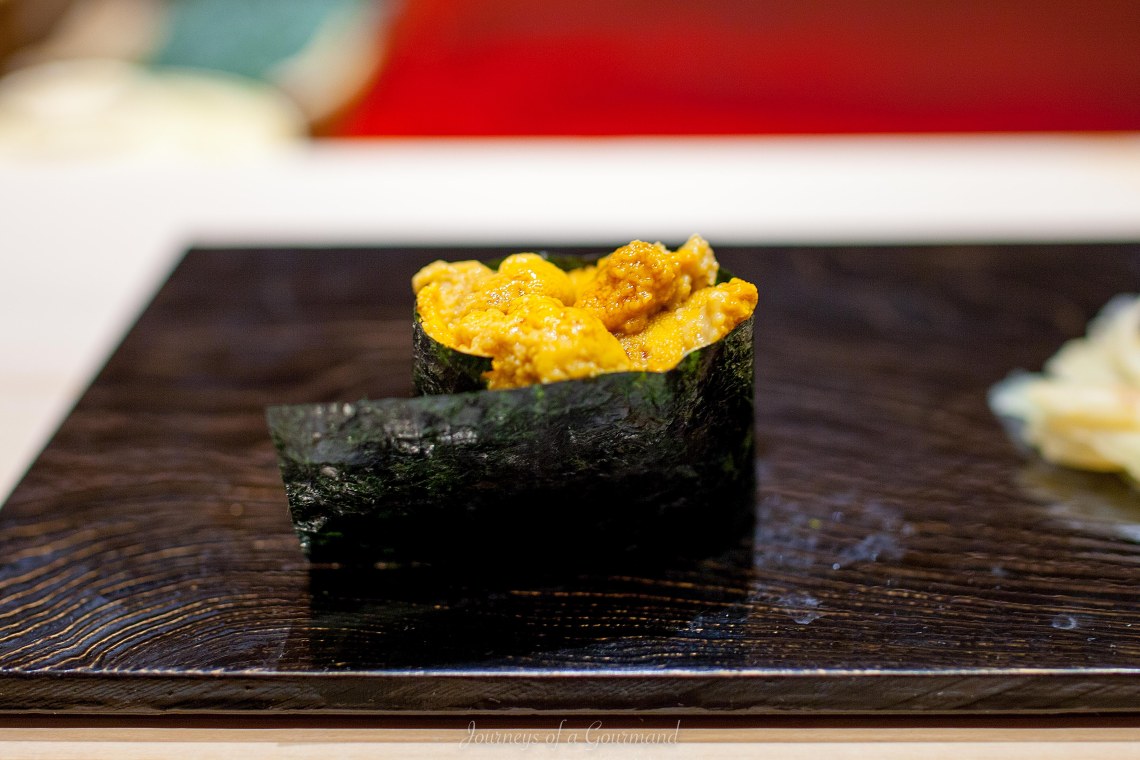 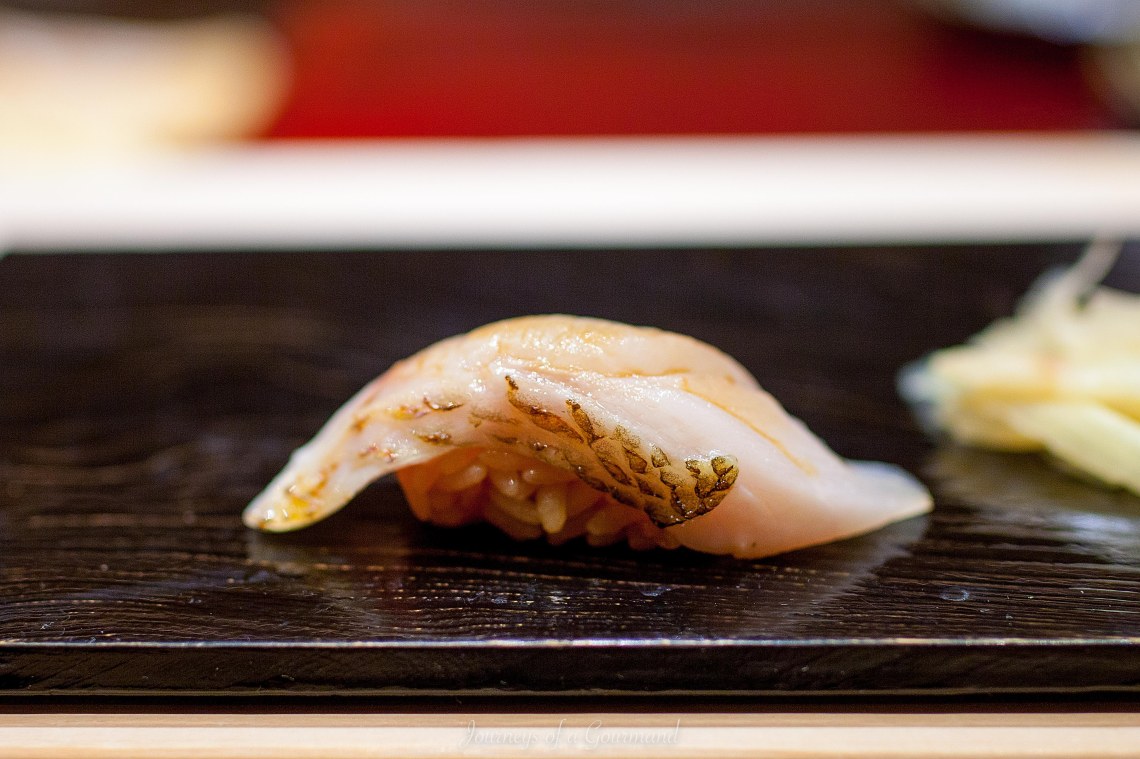 I was also able to catch the end of the anago season. Chef Sato made the best of the season with two anago sushis. The one on the left was served with a sweet sauce that underscored the melting delicacy of the anago, while the one on the right was simply served with salt, but just as delicious.

Another signature at Sushi Tokami is their tuna collagen soup, whose depth and umami were both exciting and very comforting. 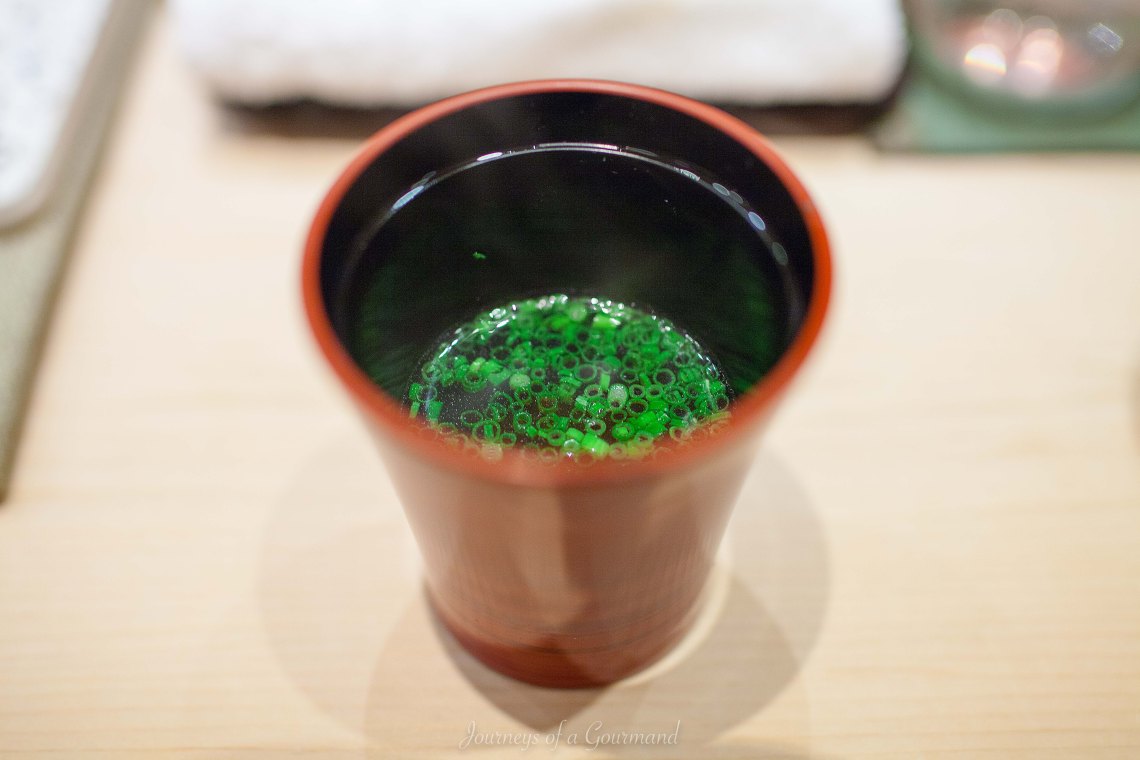 Wrapping up the meal with an amazing tamago. I especially loved the crunch from the lightly brûléed top, a marvelous contrast against the smooth and creamy custard.

Despite a few hiccups during appetizers, my meal at Sushi Tokami was a solid one. Chef Sato was very welcoming and quite chatty – in a good way – which is not so easy to find in Japan if you don’t speak Japanese. While this might not be my first choice for sushi next time I visit Tokyo, it is still well worth a visit. 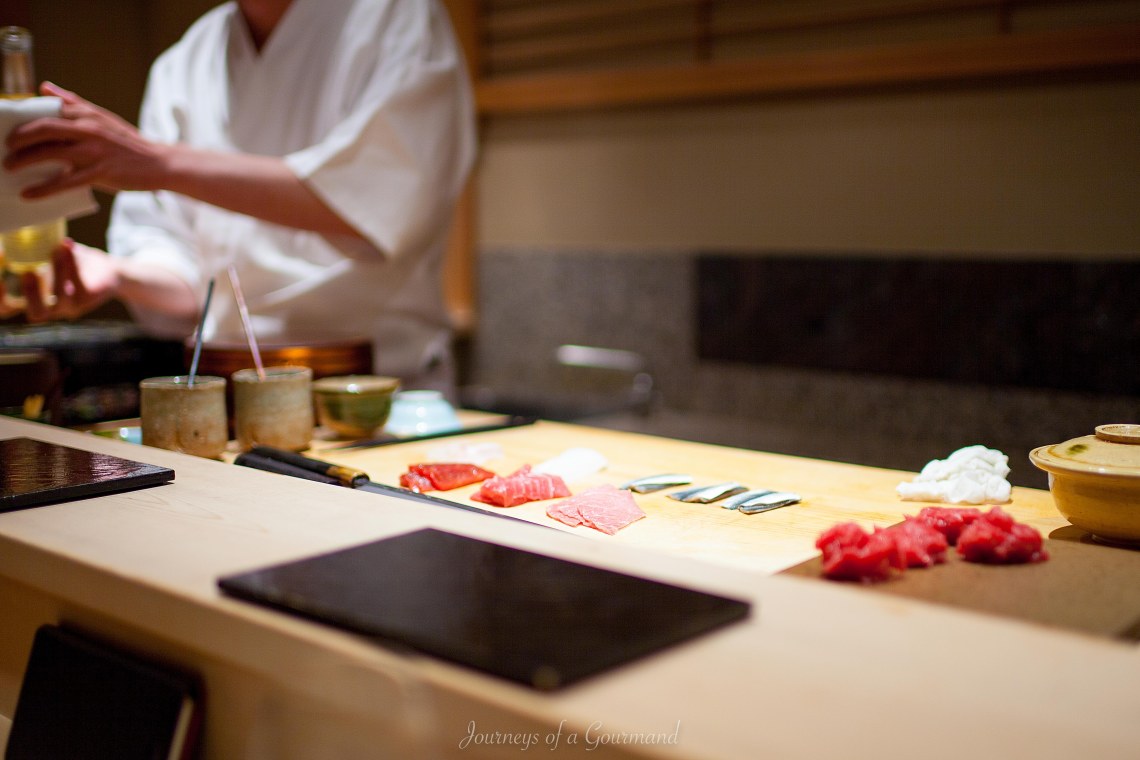