Directly across the alley from Gaggan, Asia’s best restaurant according to The World’s 50 Best, is a three-story building sporting a bright yellow facade and a sign that reads “Gaa”. If you think the names of the two establishments are too similar to be a coincidence, you would not be wrong. Gaa is the latest addition to the Gaggan empire, helmed by 29-year-old chef Garima Arora, former Gaggan sous-chef and Noma alumni. You can find traces of her time at both Gaggan and Noma in her creations, but Chef Arora makes Gaa her own with what she calls “eclectic cuisine”, using global techniques to prepare locally sourced ingredients. 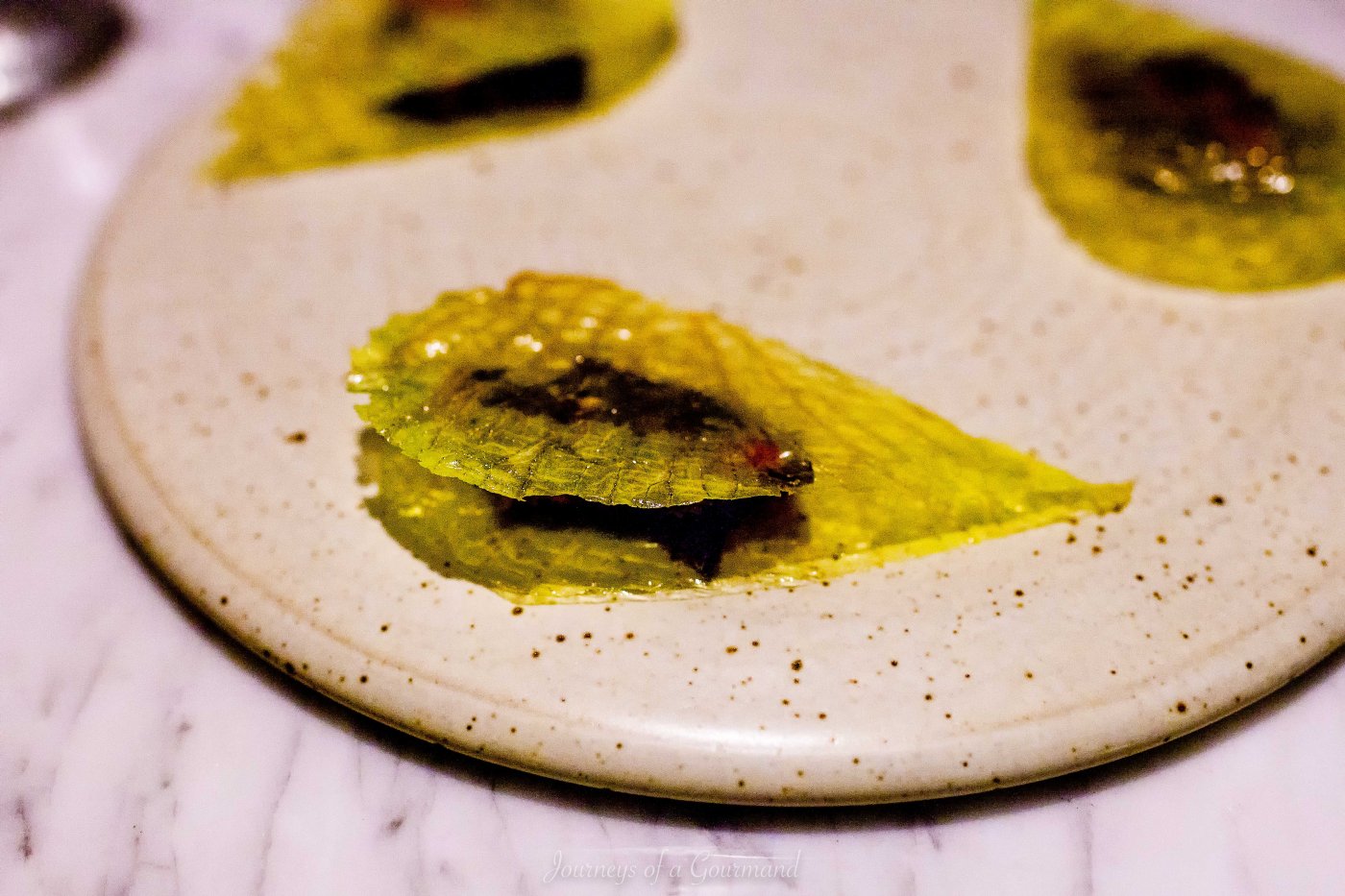 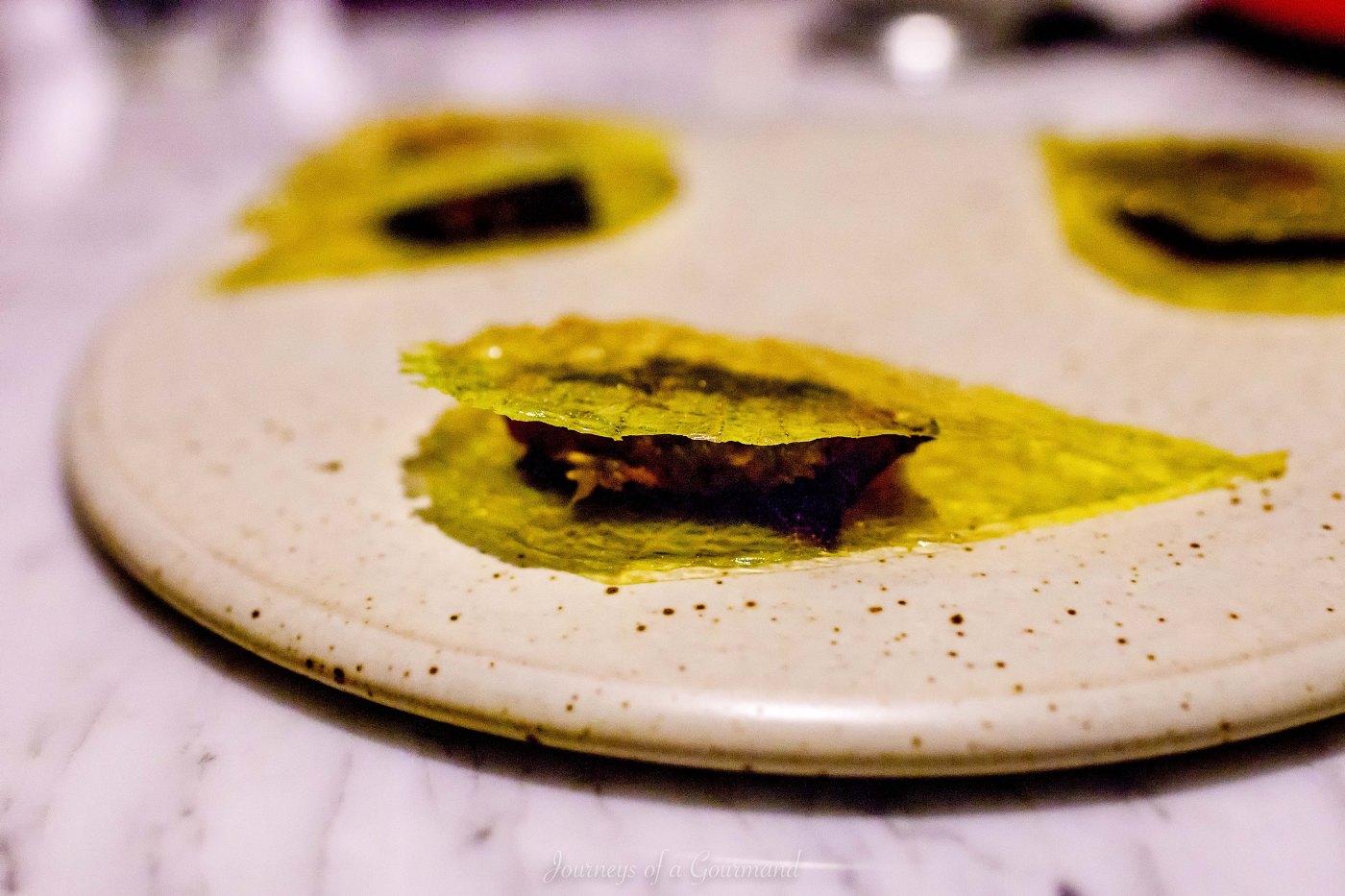 Sandwiched between crispy wafers of fried cabbage was a soft, rich relish of sweet roasted peppers, with a whisper of bitter gourd at the end to create a refreshingly clean finish. This snack would have been easier to love had the cabbage been less greasy.

Shards of frozen chicken liver were shaved over a thin slice of spiced Indian flatbread, while some juicy longan berries in between brightened the creamy liver and added variation in texture. Interestingly, the sandwich had a lingering finish of curry that reminded me of Japanese curry buns.

For all the smokey fragrance that preceded this dish to the table, the flavors were surprisingly subtle. The sweet baby corns were gently rubbed down with paprika and Himalayan black salt, accompanied by a creamy sauce made with corn milk.

Like Noma, Gaa’s tasting menu comes with a juice pairing option. The first three courses were paired with a tangy, fizzy strawberry kombucha.

Introduced by our waiter as a “Thai version of avocado”, the egg fruit was indeed similar to avocado in its creamy texture and refreshing fragrance. Gaa spiked the egg fruit purée with chili and lime juice and spread it over a thin crisp of Indian cracker, before topping it with sweet, tender crayfish laden with juicy bursts of pomelo. But despite the presence of sweetness, acidity, and heat, the dish didn’t really leave much of an impression. 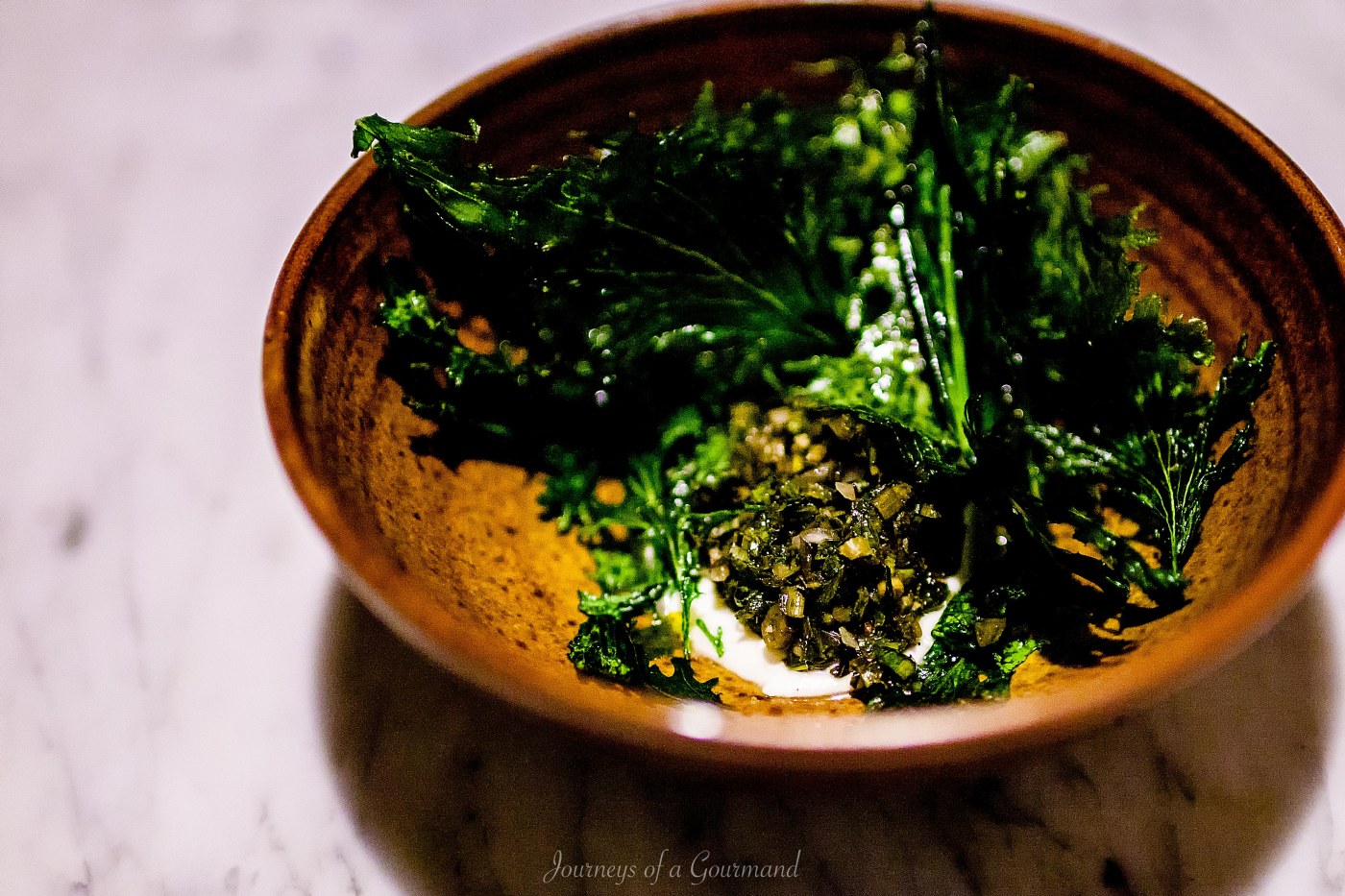 The next course was given a decidedly Japanese lilt with the introduction of cold goat milk tofu, heaped with sautéed endives and mustard green crisps. The simple-looking dish was filled with unexpected twists and turns. A grassy fragrance hit the tongue first, brightened by a light tanginess and softened by the creamy tofu. The bitterness of mustard greens emerged at the very end, taking shape slowly until it dropped its question mark. The contours of flavors were clean and precise, their combination active without seeming frantic.

The second juice pairing was made with pumpkin, mango, and kaffir lime. But the concoction had none of the heaviness usually associated with pumpkin and mango juice, tasting instead of a refreshing lightness uncannily reminiscent of watermelon.

In a refined take on India’s daal baati (lentil wheat roll), a potato dumpling was stuffed with banana flower, served on top of some tomato fennel chutney and a miso soup made with Indian split peas. The pungent fragrance of fennel was softened by the sweetness of tomatoes, while the potato dumpling and split pea essence grounded the dish with their earthy depth, coming together in a swirling, shifting concerto.

Khanom-la is traditionally a dessert from southern Thailand, made with rice flour, egg yolk, palm sugar, and honey. Gaa transformed this dessert into a savory sandwich, enveloping the golden cocoon over layers of milk skin, cabbage, and black grouper. The tender, succulent fish took well to the sweet, crispy shell, the light creaminess of milk skin, and the sharp jolt of acidity from the cabbage flecked with mustard seeds, which removed all traces of fishiness. One of the most confident dishes of the evening, this masterfully balanced sandwich satisfied the intellect as much as the palette.

The roselle juice took on a subtle Indian undertone with the addition of various spices, falling into wonderful alignment with the banana flower dumpling. 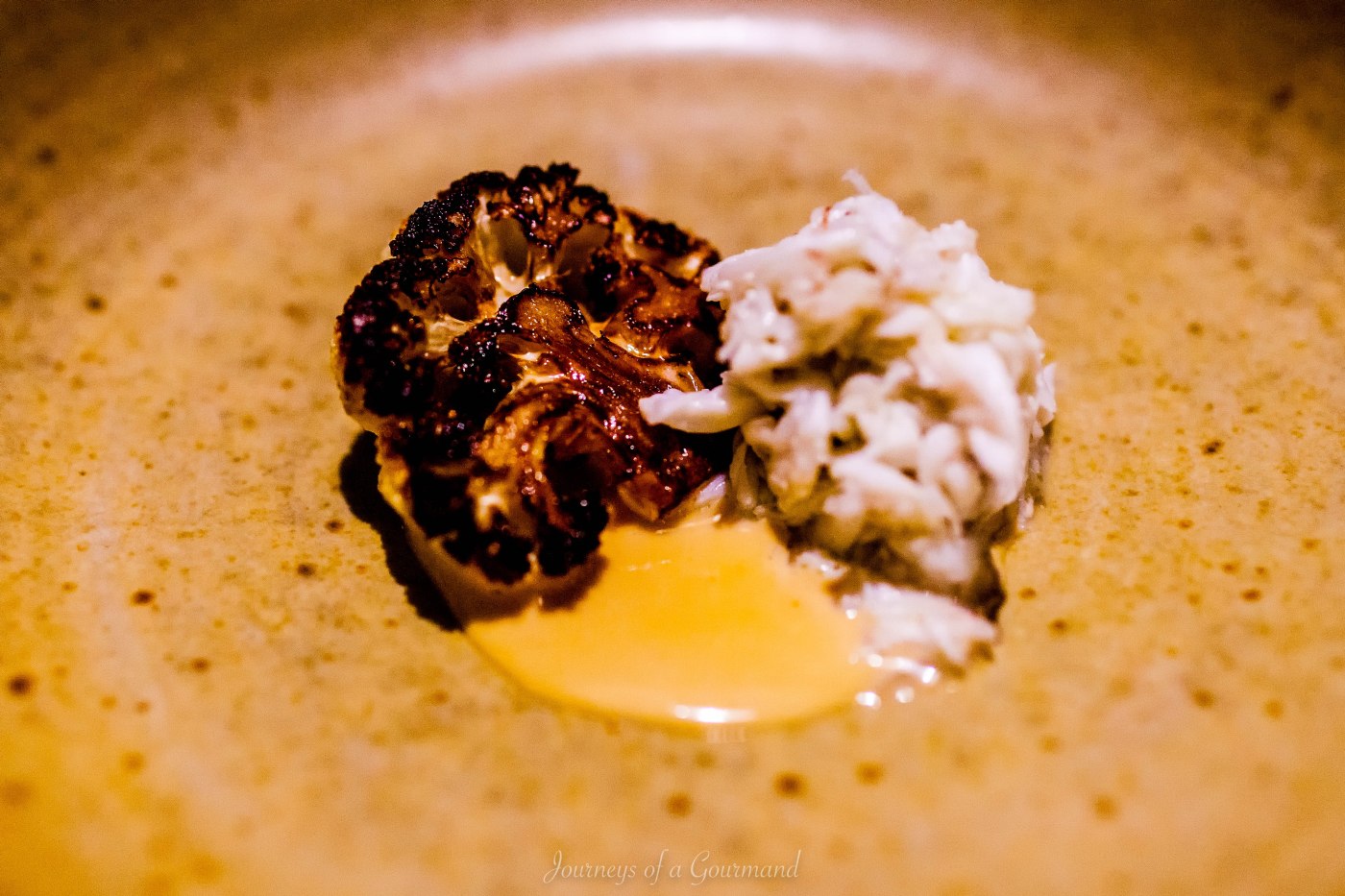 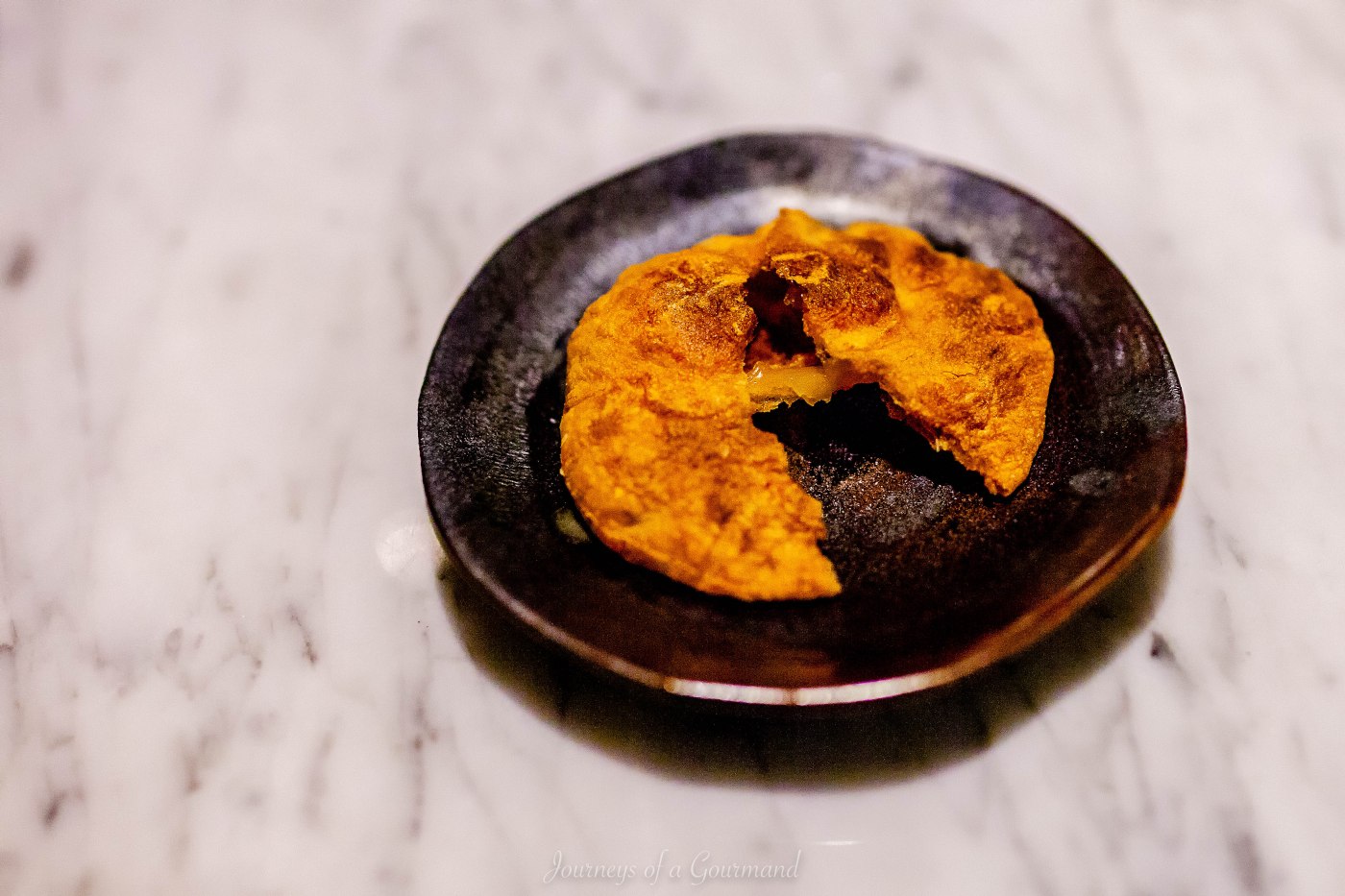 A soft mound of sweet blue crab sat alongside a halved floret of cauliflower, intensely charred on the outside but still firm and juicy within. The contrast in textures was delicate yet magical, but it was the puddle of creamy, lightly tangy goat milk whey sauce that made the dish a thrill to eat. Taking the dish even further was the potato mochi, which was crispy and gooey at the same time, and released more flavor as you chewed. There were no explosive flavors in any of these elements, but the marriage intoxicated with its simple pleasure. 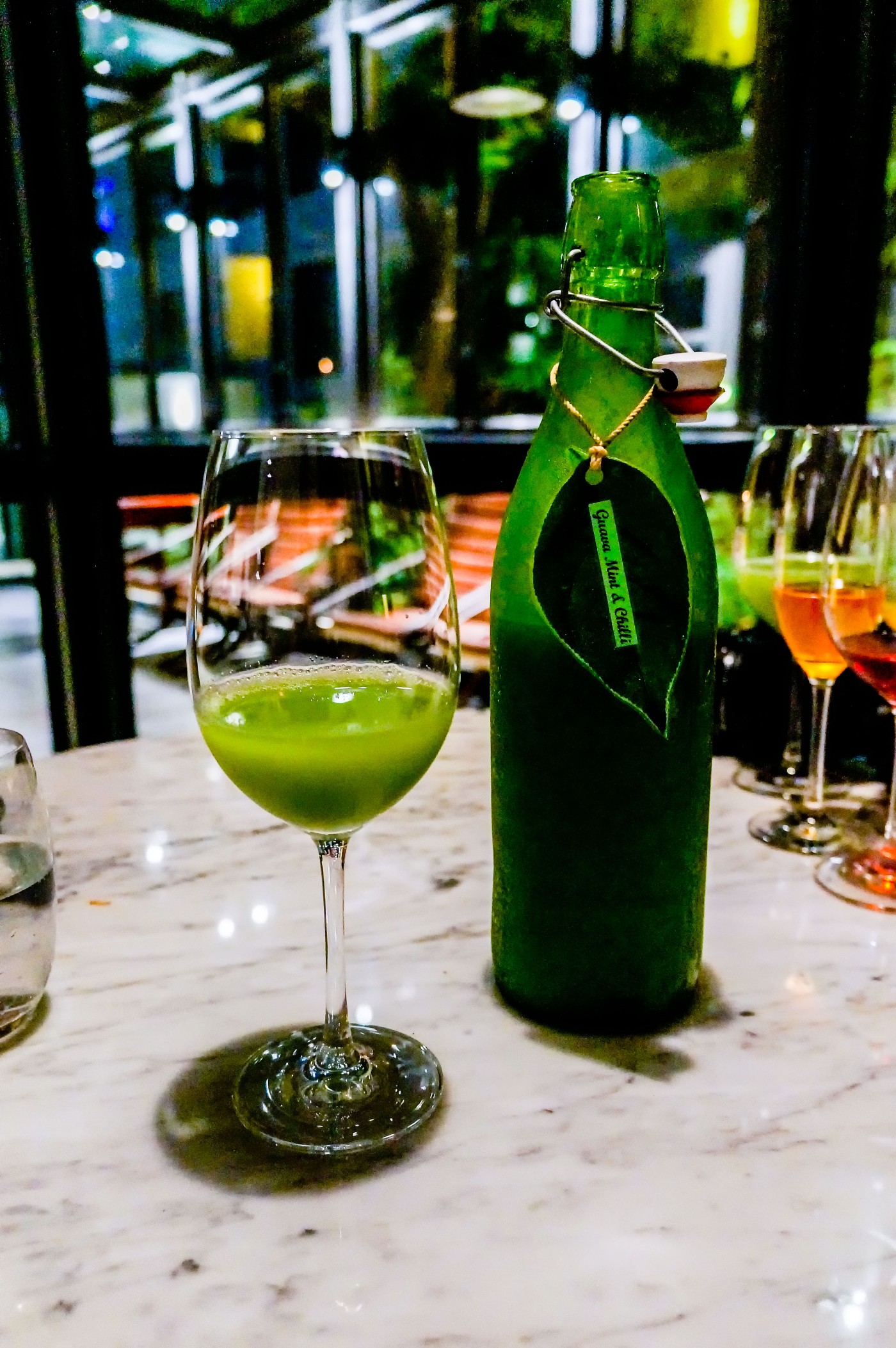 Sweet with guava, fresh with mint and coriander, and invigorating with a flicker of heat at the end, this drink was the perfect accompaniment for the rich crab.

The deeply charred rib was covered with coriander, onions, and pomegranate, and accompanied by various pickles, lettuce, and fried flatbread. The meat was juicy, but incredibly salty. After trying every possible combination, I was forced to conclude that it was simply inedible. Our server told us that the meat was marinated sou-vide in a split pea miso for three days, an explanation that would have been more satisfactory if we could actually taste any form of depth instead of just a mouthful of saltiness. 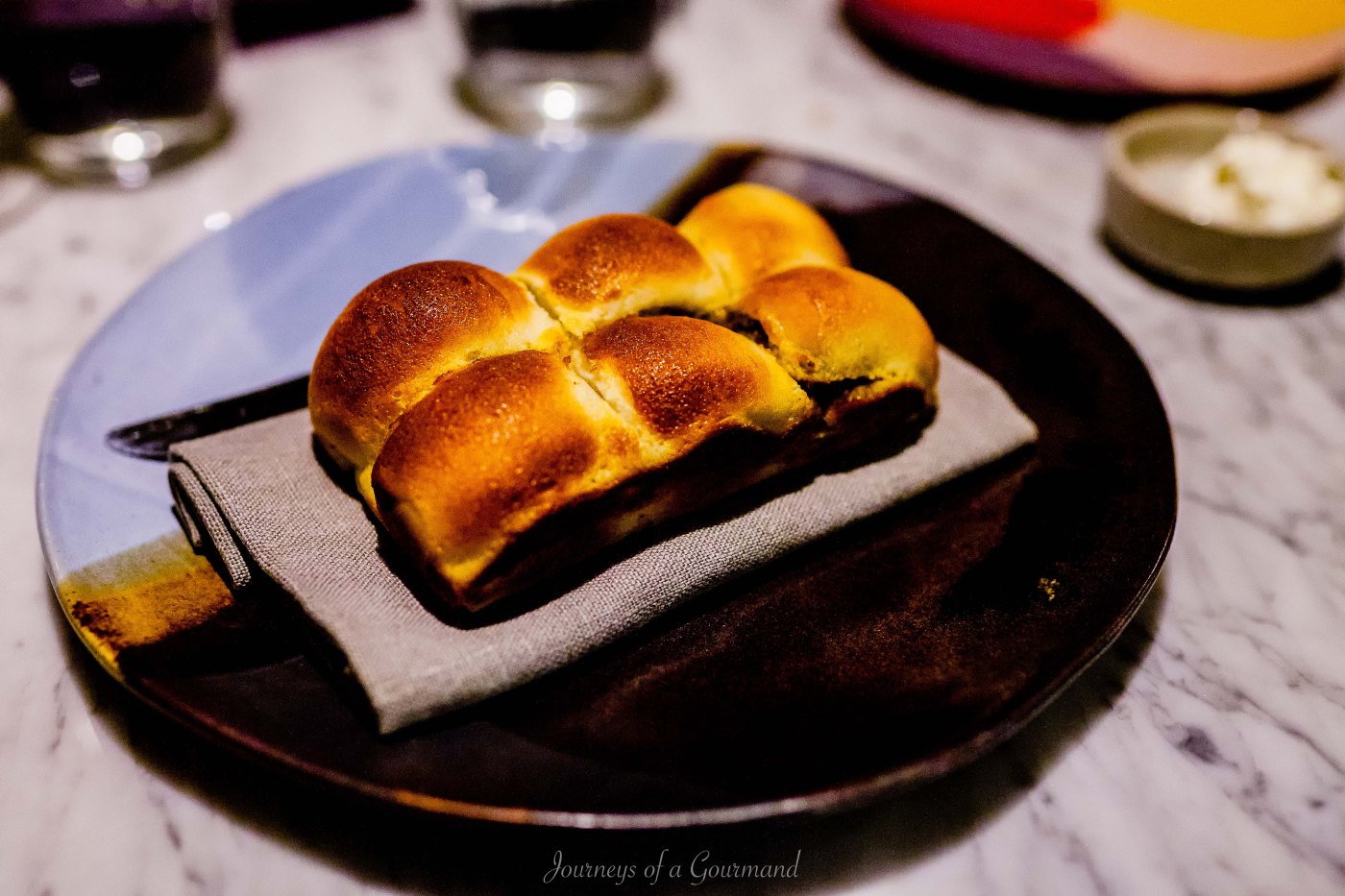 Interestingly, bread was served at the end of the meal, rather than the start. The soft Indian bread rolls called pavs were stuffed with minced lamb sautéed with herbs, and served with a light, tangy house-made butter. The dish might have been more memorable if our taste buds hadn’t been ruined by the ribs.

The final juice pairing was a green apple juice infused with an intense dose of Thai basil. (No photo, sorry…)

A much needed palette cleanser, the ice creams were intriguing, but ultimately less than exciting. These were followed by a quartet of chocolates, among which my favorite was the wild betel leaf, half coated with chocolate, the other half sprinkled with fennel powder. Clockwise, a chili-infused laddu that released a spicy rush on the tongue, a soft little peak of rice bran cream, and a square of sweet tamarind, all of them dipped in chocolate.

Our dinner started with some high notes, but sadly ended on a stretch of unimpressive ones. The pacing of the meal also left room for improvement – after being rushed through the first half of the menu, we suffered an inordinately long wait before the pork ribs. It was telltale signs like these that gave away Gaa’s tender age (the restaurant officially opened on April 1st this year). 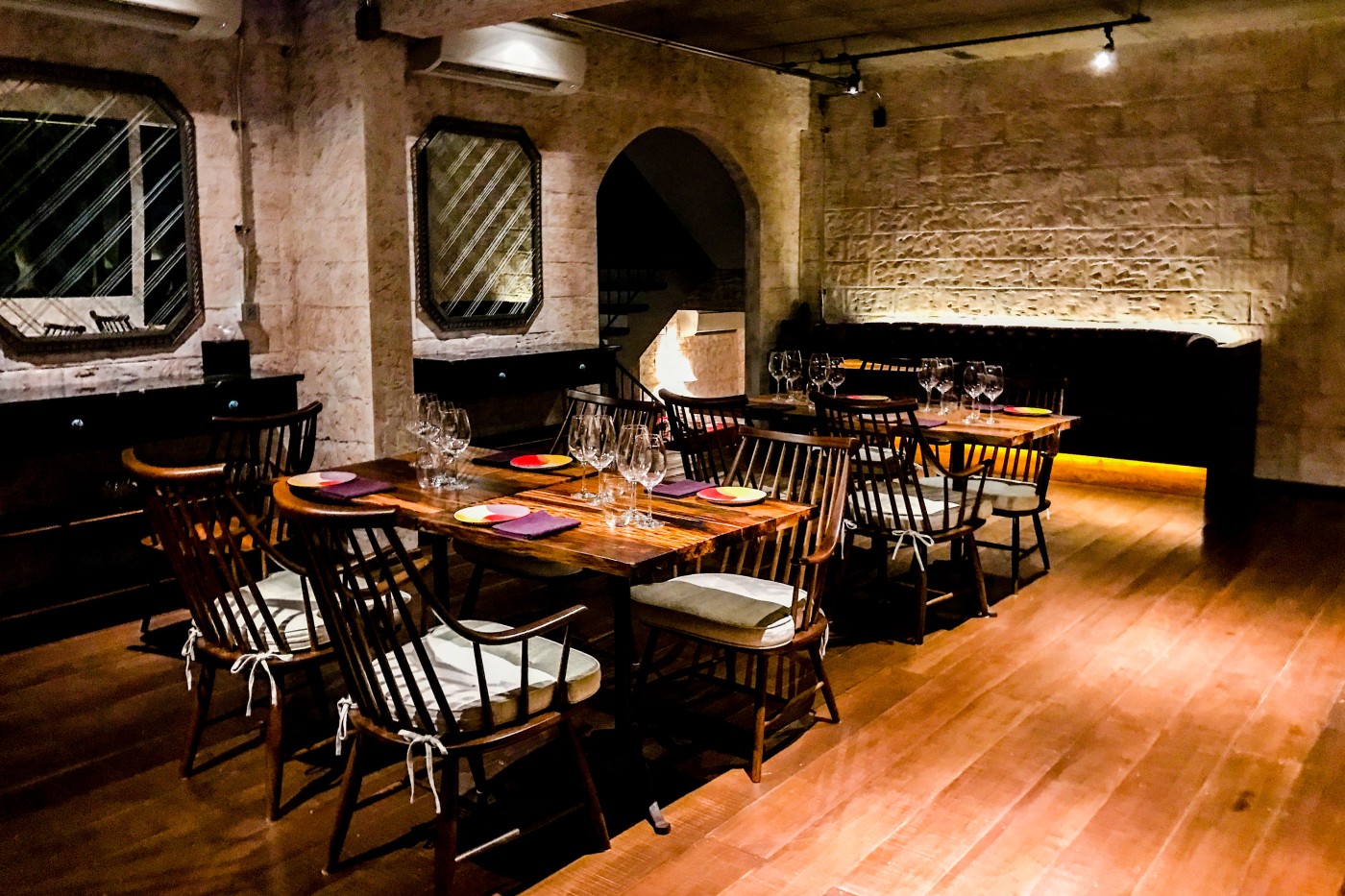 Nonetheless, I appreciated the distinctly feminine sensibility that unfolded throughout the evening. With the exception of the pork ribs (which I still consider an accident regardless of what our server said), there were no harsh lines or aggressive clashes. The flavors were frequently exotic but admirably restrained, their contours precise but smooth. And yet, perhaps caused by a cultural disconnect, none of the dishes resonated with me on a deeper level, for all that I enjoyed their gentleness and subtlety.