Take a quick look through my blog and you’ll surely notice that I gravitate more towards western cuisine. However, in preparation for my upcoming trip to Tokyo, I have decided that some proper induction to Japanese cuisine is in order, and a friend recommended Ginza Onodera as a good starting point for sushi.

Onodera offers three sushi omakase menus for lunch, priced at 388, 588 and 988, that differ in both the number of sushi and the fish used. I went with the one in the middle, which consists of 13 pieces of sushi (including tamago), as well as an appetizer, soup, and dessert. If you want a more complete experience, there is also a 1,188 menu that offers more cooked dishes.

Starting with a cup of Chawanmushi. The delicate and silky egg custard was full of umami, topped with sweet Bafun Uni from Hokkaido.

One of Onodera sushi’s most distinctive features is that they season their rice exclusively with red vinegar, which has a stronger taste than white vinegar. As I understand it, most sushiyas only use red shari for tuna and fishes with stronger flavor, but I found that the red shari worked well for me with most of the fishes I had that day.

1. Shima-aji 縞鯵 (white trevally)
The first piece was a shima-aji brightened by a little lime juice. I was impressed by the way the lighter acidity from the lime played with the stronger acidity from the red vinegar. A promising start for sure. 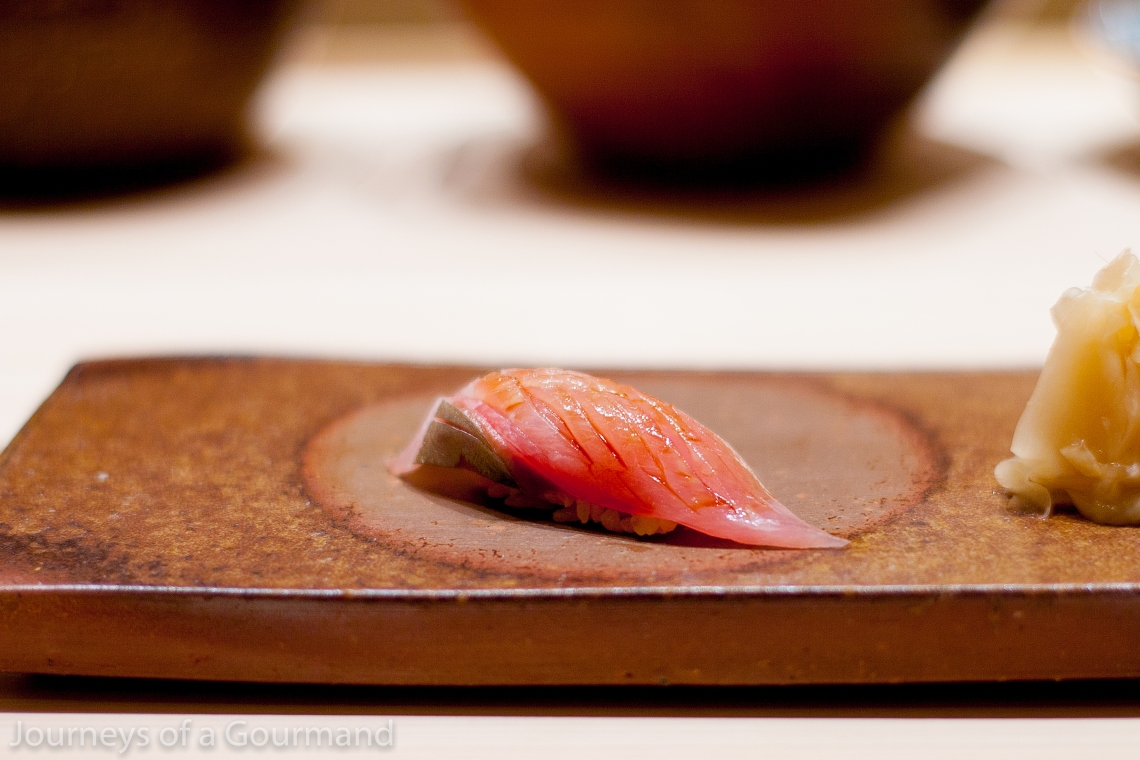 2. Kinmedai 金目鯛 (golden eye snapper)
Very deep in flavor, but a bit too salty for me. 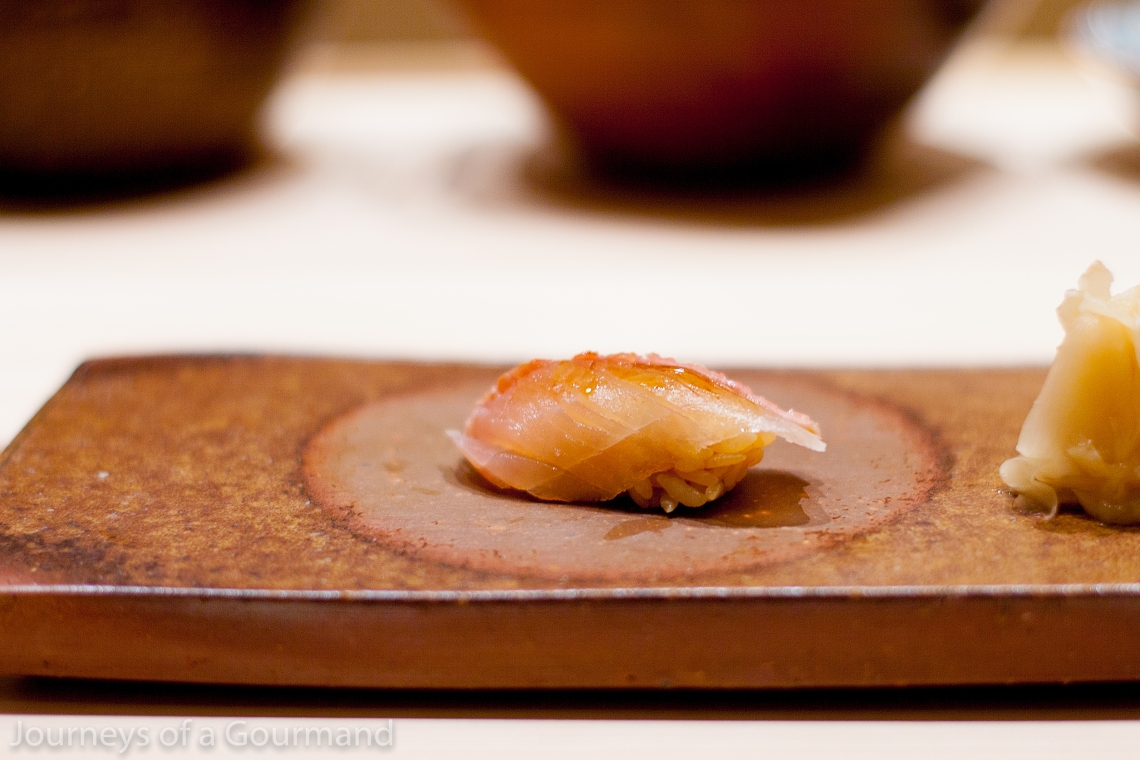 3. Yari-ika 槍烏賊 (spear squid)
The squid was seasoned with lime juice and ginger. I liked the clean flavors and the interesting contrast it made with the slightly gelatinous texture, but this was the only time in the meal where I found the shari a bit too strong and overpowering for the fish. 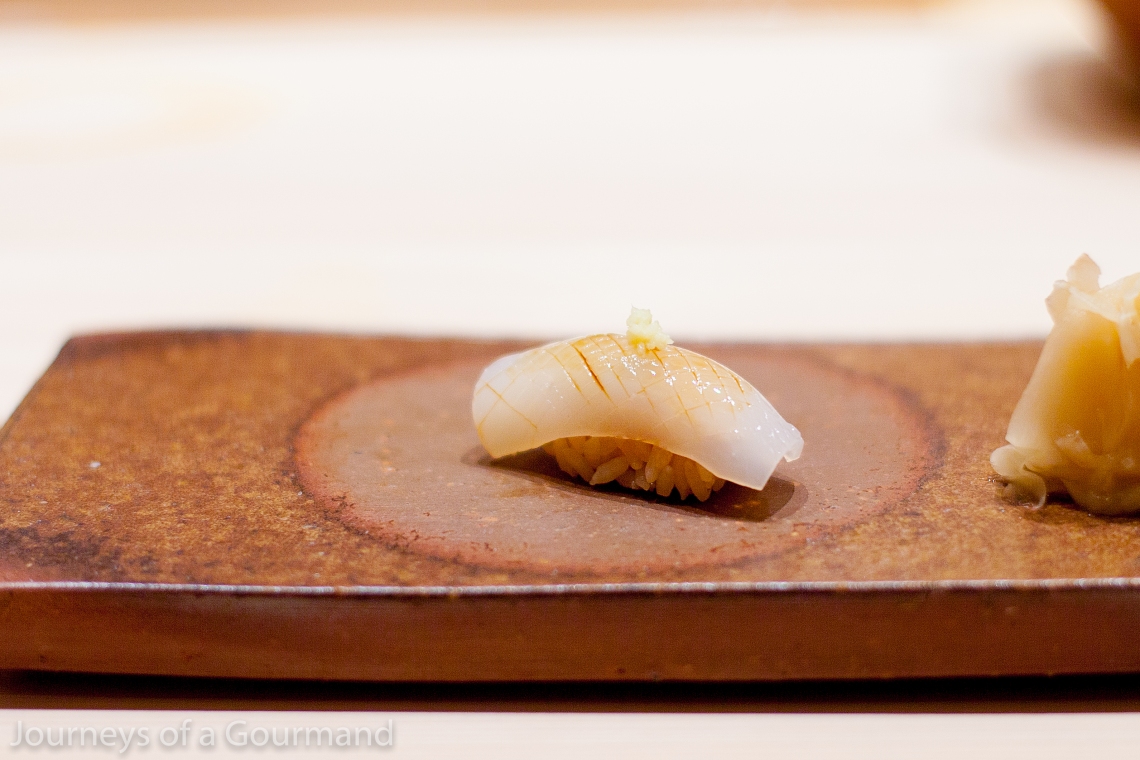 4. Mirugai 海松貝 (geoduck clam)
The mirugai had a strikingly different texture from the squid before it. Where the squid was tender and gelatinous, the mirugai was clean and crunchy, and the flavors were much more balanced.

5. Suzuki 鱸 (Japanese sea bass)
One of my favorite pieces of the meal, the suzuki had a delicate and subtle sweetness laced with a hint of ginger.

6. Katsuo 鰹 (skipjack tuna)
The chef added some chives when making the shari for the katsuo, giving it a refreshing fragrance.

7. Otoro 大トロ (fatty tuna)
The otoro was, of course, meltingly fatty, and the red shari did a wonderful job of cutting through the richness.

8. Sake 鮭 (salmon)
The salmon from Chile had been marinated, so that it was not as rich as usual, but had much more flavor and umami.

9. Aji 鯵 (Japanese horse mackerel)
After the richness of the salmon, the aji felt a bit too delicate.

10. Akami 鮪赤身漬け (marinated lean tuna)
The akami was already being marinated on the counter when I arrived, giving it an incredibly deep flavor that lingered on and on. Another favorite.

11. Kohada with Kombu 小鰭 (gizzard shad)
The kohada was very bold and strong, but the white kombu brought a subtle sweetness that balanced the sharpness of the fish. 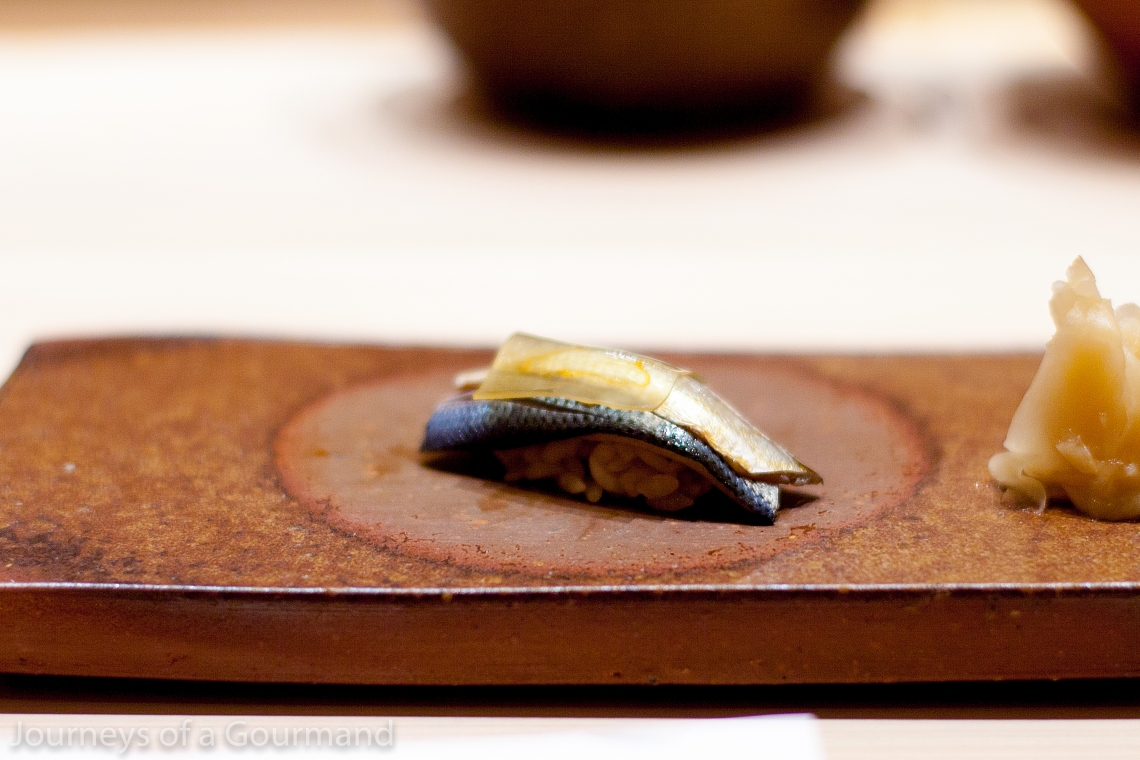 13. Tamago 焼き玉子 (grilled omelet)
Wrapping it up with some light and spongy tamago. 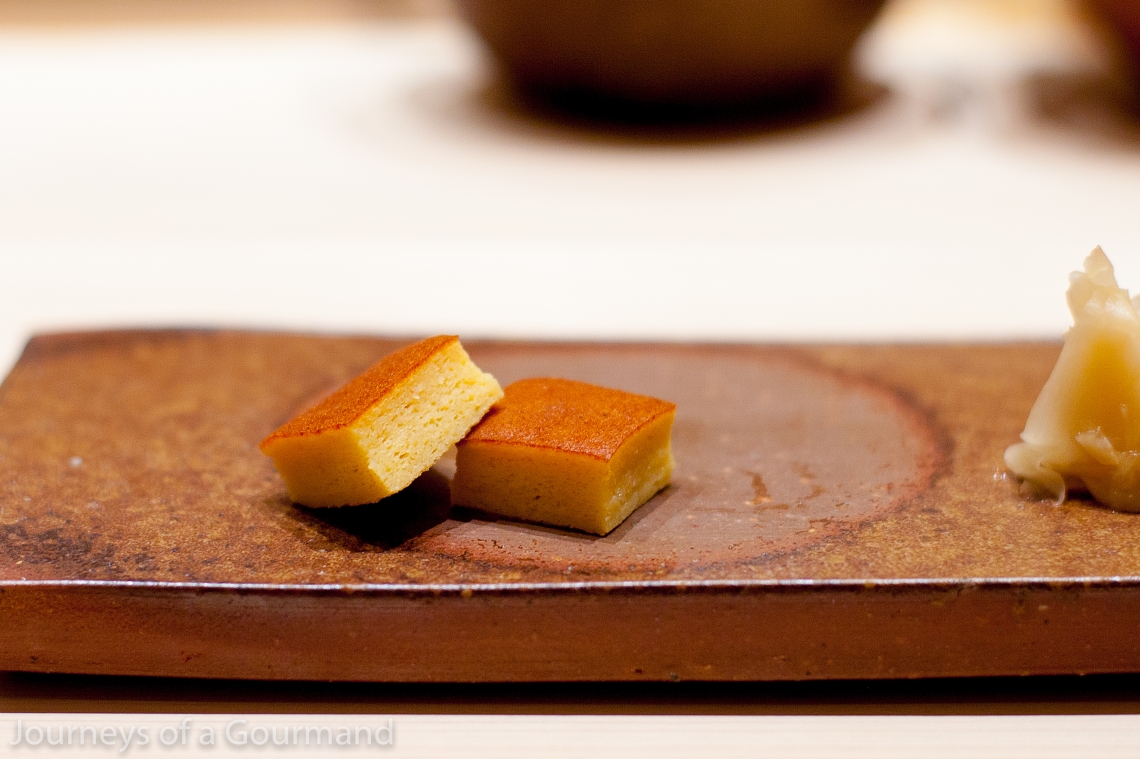 We were offered a choice between miso soup and seafood soup, and I chose the latter. The Seafood Soup was a clear but umami-full broth, with a ball of squid and prawns in the middle.

For dessert, a refreshing and summery Fruit Jelly made with peach, apple, and liquor, served with fresh fruits. Chef Sakagami designed this dessert as a summer special on his last visit to Shanghai.

Apart from sushi, Onodera also offers tempura and teppanyaki. I ordered a few pieces of tempura from the à-la-carte menu. The Uni Tempura (300) was sweet and creamy, with a fragrant and refreshing undertone of shiso, but I would have liked the uni a bit less cooked. The Maitake Mushroom Tempura (60) on the other hand was a little greasy. 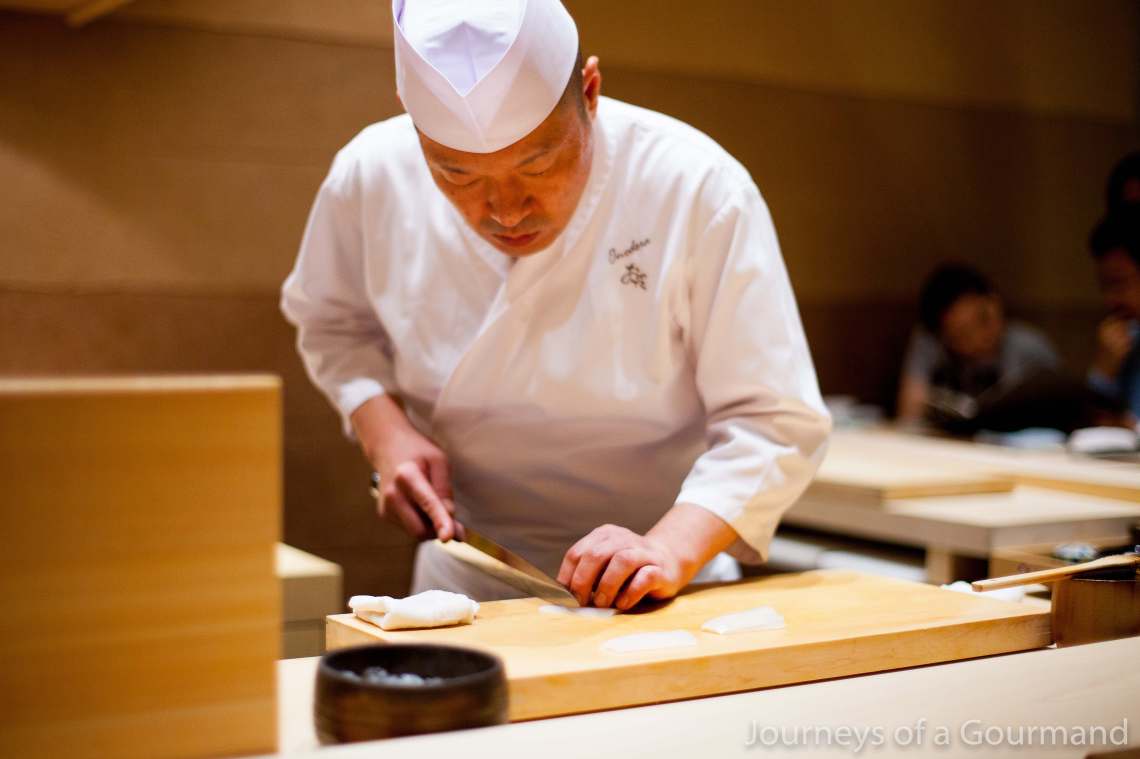