I have to go more than a few months back to recall another meal as exciting and memorable as my dinner at Table Black. In Shanghai’s mercurial dining scene, where restaurants often close when they have scarcely opened, it is hardly surprising that many are taking the safer route. Yet amidst these increasingly homogenous and carefully non-controversial restaurants, Table Black feels all the more refreshingly ambitious. 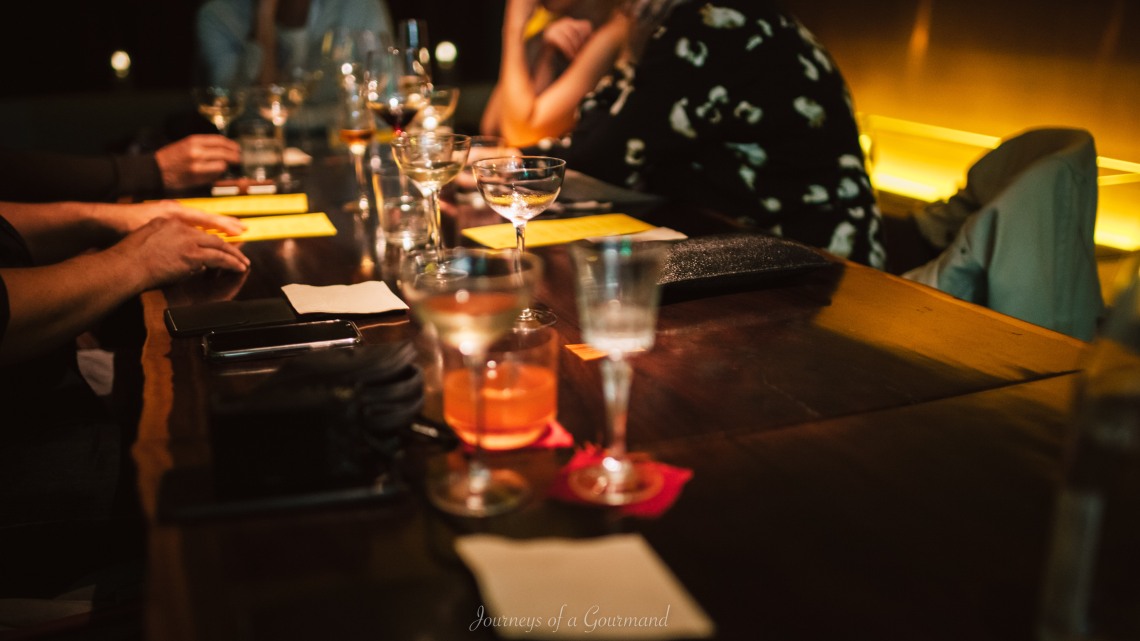 Technically, Table Black isn’t a restaurant in itself, but rather one-third of the trio of F&B concepts housed in the three-story revival of Blackbird. After the original Blackbird, a brunch hotspot across from the US Consulate, got swept away by the torrent of redevelopment in 2017, its parent company OHA Shanghai teamed up with New Zealand-born chef Mr. Blake Thornley last summer to raise the restaurant from the ashes.

The resurrected Blackbird is a gigantic, chrome-plated box in Columbia Circle that looks like it was left behind by extraterrestrial visitors. Thankfully, this imposing facade belies its welcoming interior. The relaxed first-floor lounge serves a casual all-day menu, while a hidden staircase in the back leads to the more intimate Table Black and Bar Black on the second floor.

You will be invited to a drink at Bar Black, where you can also enjoy a fairly sophisticated à-la-carte menu. But the headliner here is the 10-seat chef’s table hidden behind heavy velvet curtains, where Mr. Thornley and his team offer what is arguably the best-value tasting menu in Shanghai at just RMB480. 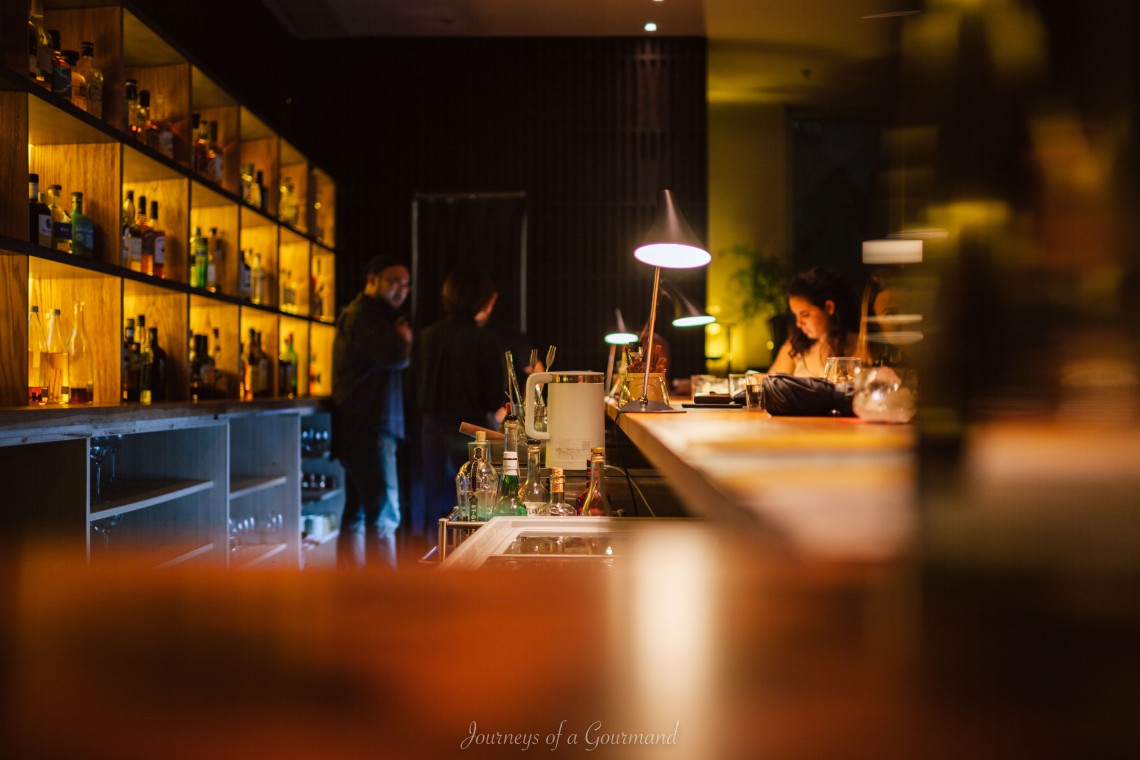 Tasting menus can come across as forced and hollow when a chef doesn’t have much to say; Mr. Thornley seems to have binders of stuff just waiting to be said. If you have been to Oha Eatery, where the same team serves up Guizhou-influenced small plates, you will know something about Mr. Thornley’s inventive and unflinching style of cooking. At Table Black, his production takes a quantum leap in complexity and ingenuity, presented in eight exceedingly thoughtful, unapologetically adventurous courses.

A trio of snacks arrive with little fanfare but much gusto. The cube of salty ham hock coated in tangy beef broth is both electric and familiar. Crunchy lobster cracker is laden with a vivacious scallop tartare that pops with shallots and sea grapes. A sheath of tender air-dried mountain beef gives way to a quietly spectacular filling of soft rice tofu, accented with tomato and underpinned by a fermented savory depth — a world of dimensions in a single bite. 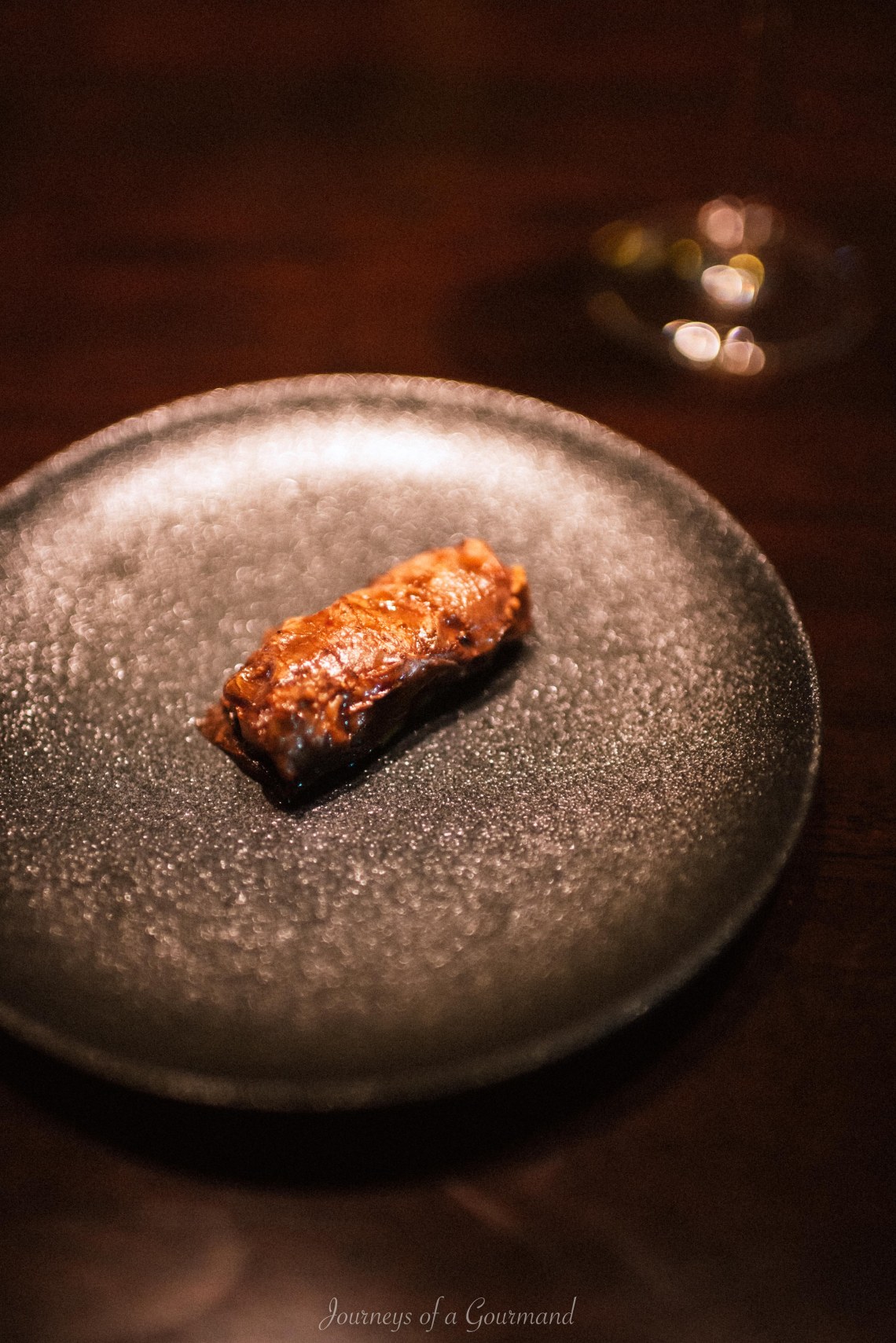 True to form, Mr. Thornley never pulls his punches throughout the evening, but he is keenly attuned to the ebbs and flows of his flavors, flirting fearlessly with sensory overload without toppling over. For every dish that dances gleefully on the edge, he offers another that draws us back onto steadier ground. His menu is by turns daring and comforting, interspersing whimsical ideas with local inflections, as well as the occasional Southeast Asian touch from his years as chef-de-cuisine of the acclaimed restaurant Mosaic in Bali.

A rhubarb-flecked oyster tartare buried in vegetable snow releases an insistent wave of oceanic brininess, laced with a grassy lightness and a tingling note of chili heat. It can take more than a minute to wrap your mind around this, but its quirks are offset by the next course. The pairing of salty caviar and sweet, ginger-laced root vegetables gains a hidden depth from the addition of Baijiu, whereas tender horse meat enveloped in a crunchy net of bamboo fungus is made exceptional by a “ten year soup” that is as head-spinningly dark and voluptuous as the name promises.

You will only get one of these two dishes, though, and your neighbor will receive the other, because, as the menu gently reminds us, “sharing is caring.” The same goes for the next two dishes. One of them is a bowl of shaved foie gras, thrown together with thin ribbons of celery and thick strands of green apple purée; my palate was strangely into this even as the mind boggled. By contrast, the other option falls a bit flat, featuring a rectangle of Maotai jelly that is too jellified to add much to the intensely salty strips of cured Arctic char and river trout underneath. 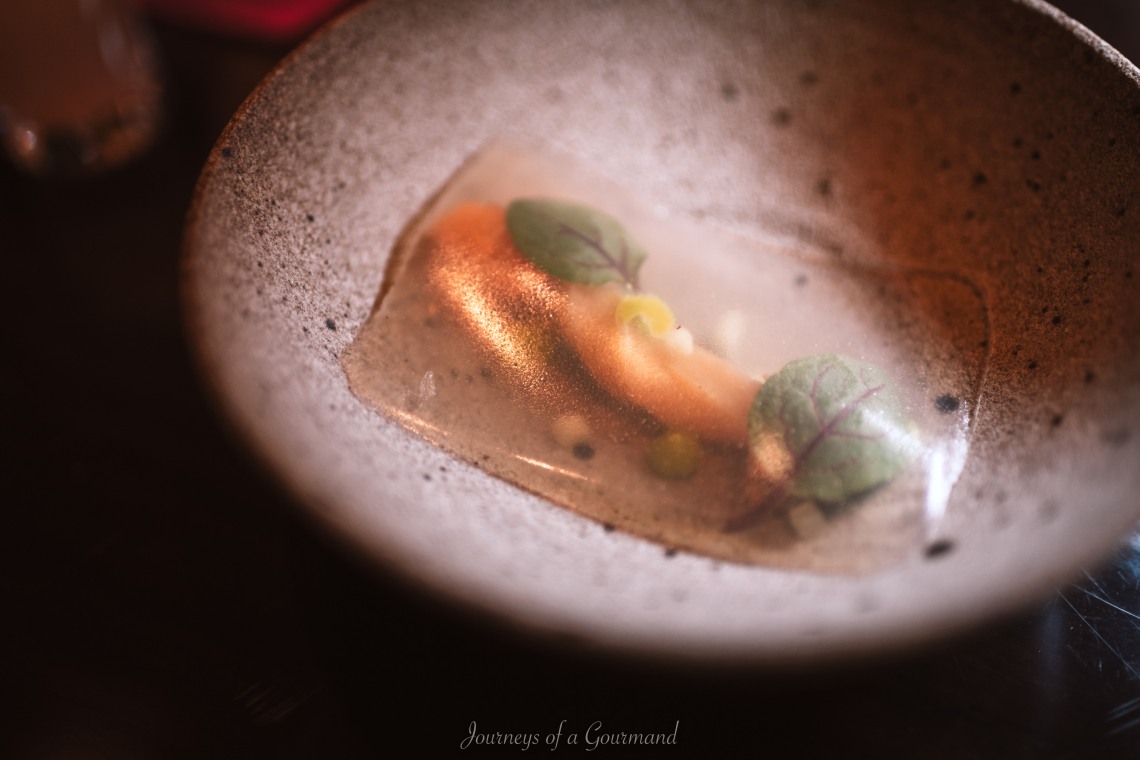 There is an overarching largesse and a certain wildness to Mr. Thornley’s cooking, which wouldn’t surprise you at all if you have met him in person. Every time he comes to the table, animated and boisterous, his personality seems to fill up the dining room as he presents his dishes with a dry wit and unbridled energy. 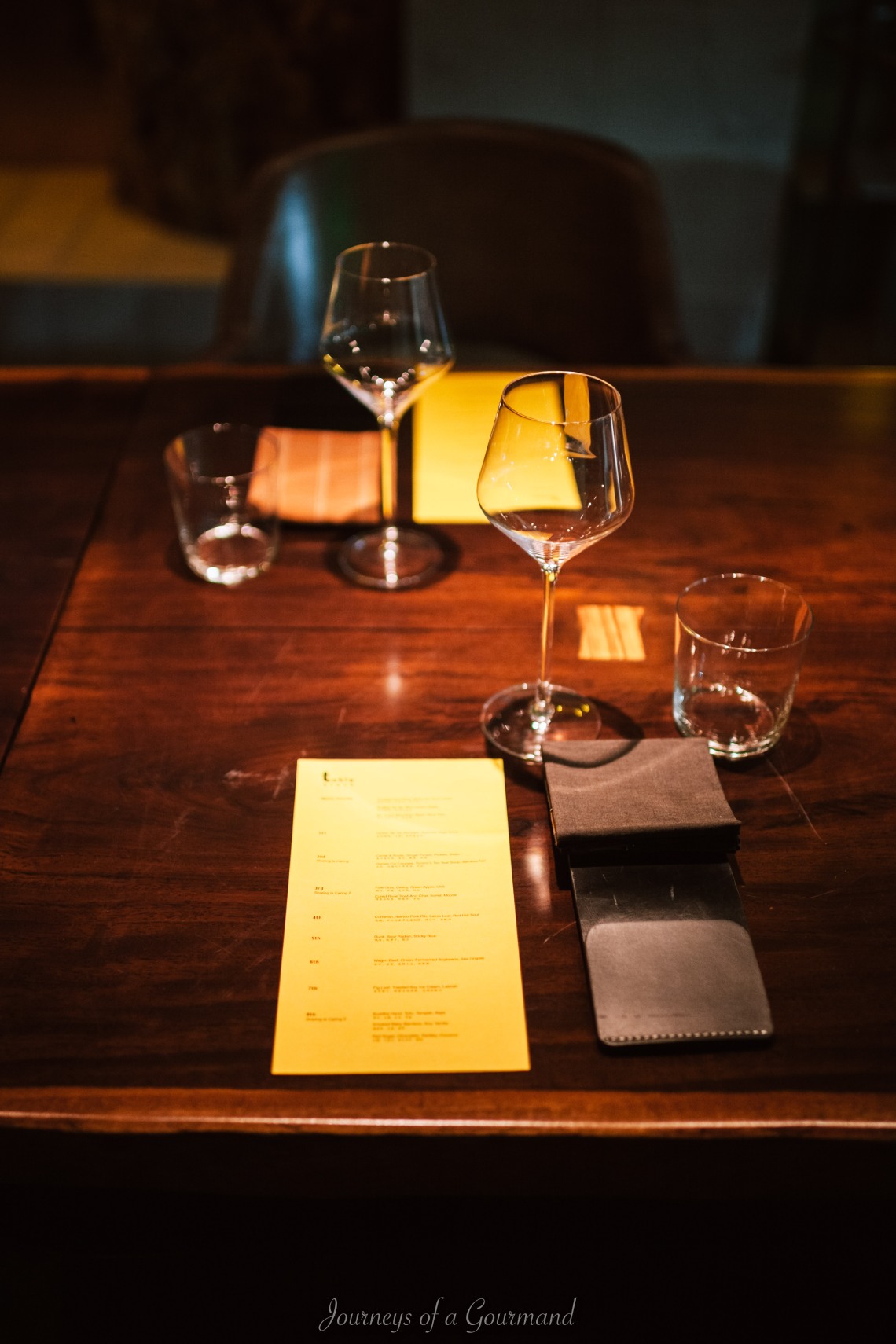 Things are hardly ever straightforward at Table Black, but the kitchen is at its most sure-footed with bold, full-bodied flavors, evident in three forceful mains that assault the senses in quick succession. A random-sounding potpourri of pork rib, cuttlefish, laksa leaf, and squid ink sees Mr. Thornley’s imaginative streak deployed to visceral effect. Thin strips of cuttlefish provide a gentle break in texture to the pork, which is tender enough that you can pull the bone clean out. The first bite is electrifying, a rush of warm spices and pungent squid ink and tangy, punchy aioli; as the novelty wears off, the dense, hefty flavors can begin to wear you down. Nonetheless, this is one of the most intriguing riffs on surf and turf I’ve encountered. 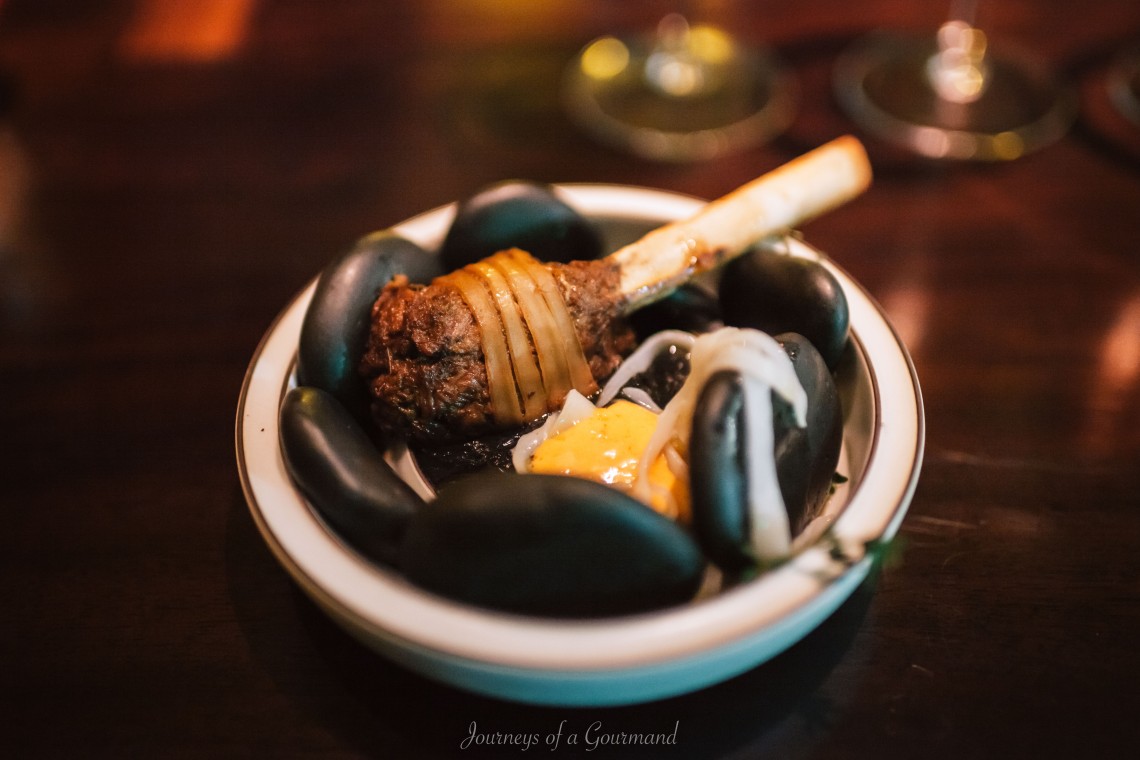 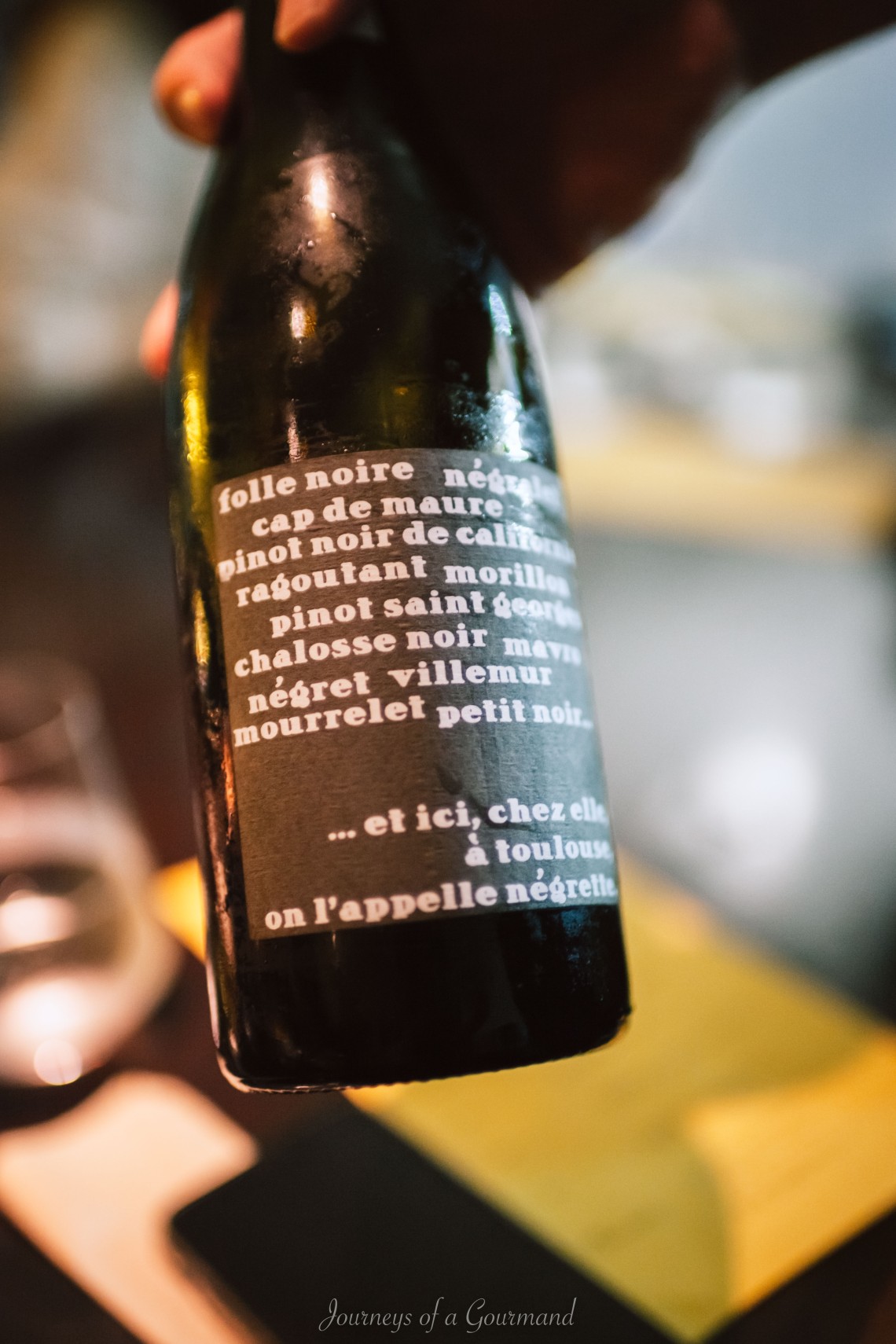 The pork rib would take the crown for being the most impactful dish of the evening if not for the next course: a duck confit sandwich by way of a Shanghai breakfast stand. Mr. Thornley cooks the legs down with sour radish, sandwiches the shredded meat between sheets of sticky rice fried to a crackle, and serves them next to a cup of warm, crisp duck broth that works equally well for dipping or sipping. This is, in essence, the best cifan of my life. And what’s better? You can order this at the bar. 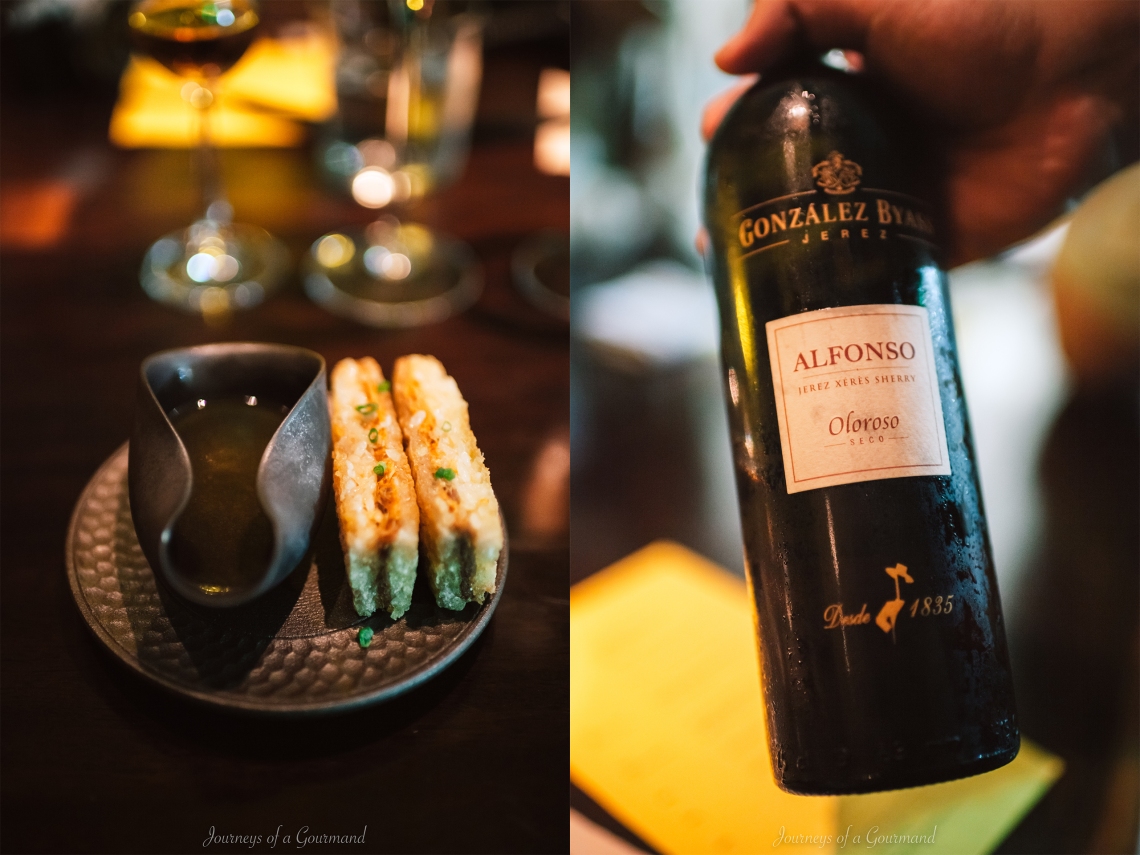 “For your main course, here’s an onion. Merry Christmas!”

It wasn’t just the onion, of course, but I honestly wouldn’t have minded. Its sweet, juicy flesh is filled to the brim with smooth, rich soubise, a classic French onion cream sauce that becomes gently funky in Mr. Thornley’s hands with the addition of fermented soybean. Thick coins of sweet, smoky sausage are hidden within, echoed in a bowl of fantastic fried rice alongside. With sides like these, the wagyu ribeye could almost be secondary.

We were all feeling a little sluggish at this point, a state that Mr. Thornley seemed to have anticipated, because his next offering was more invigorating than a shot of espresso. Underneath a brittle crystalized fig leaf is half a caramelized fig, rounded out by an earthy soybean ice cream, and then jolted with a thrillingly sharp labneh. 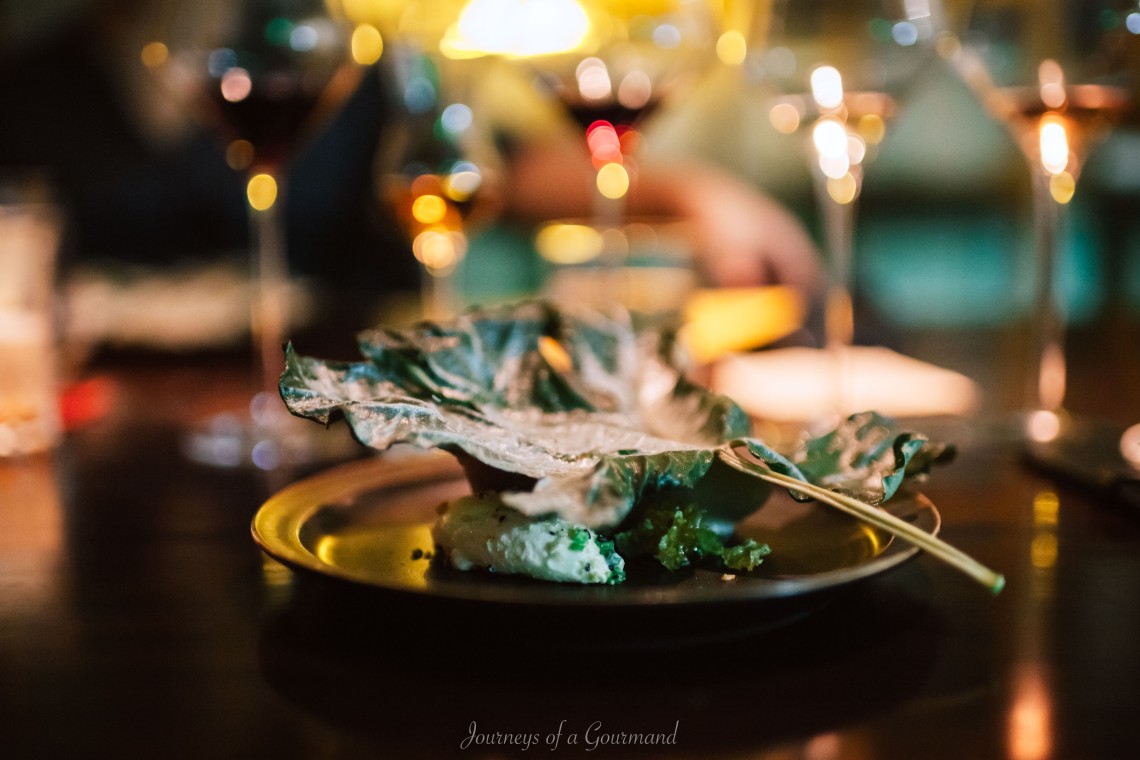 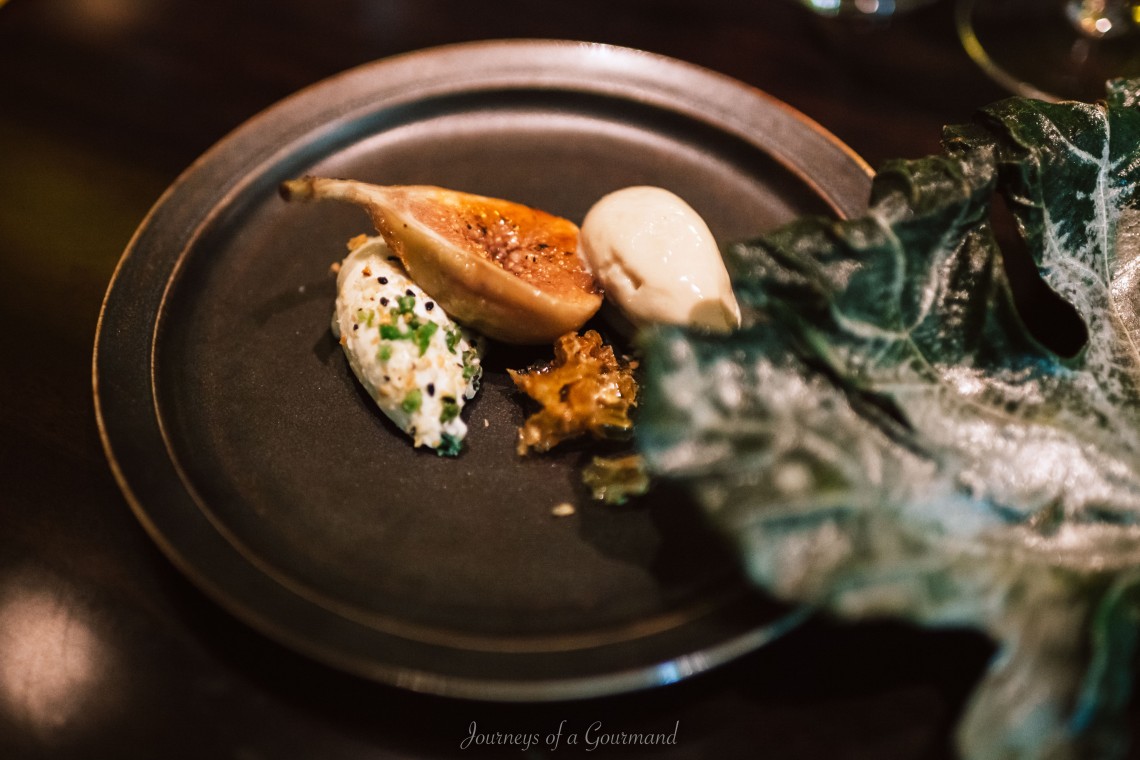 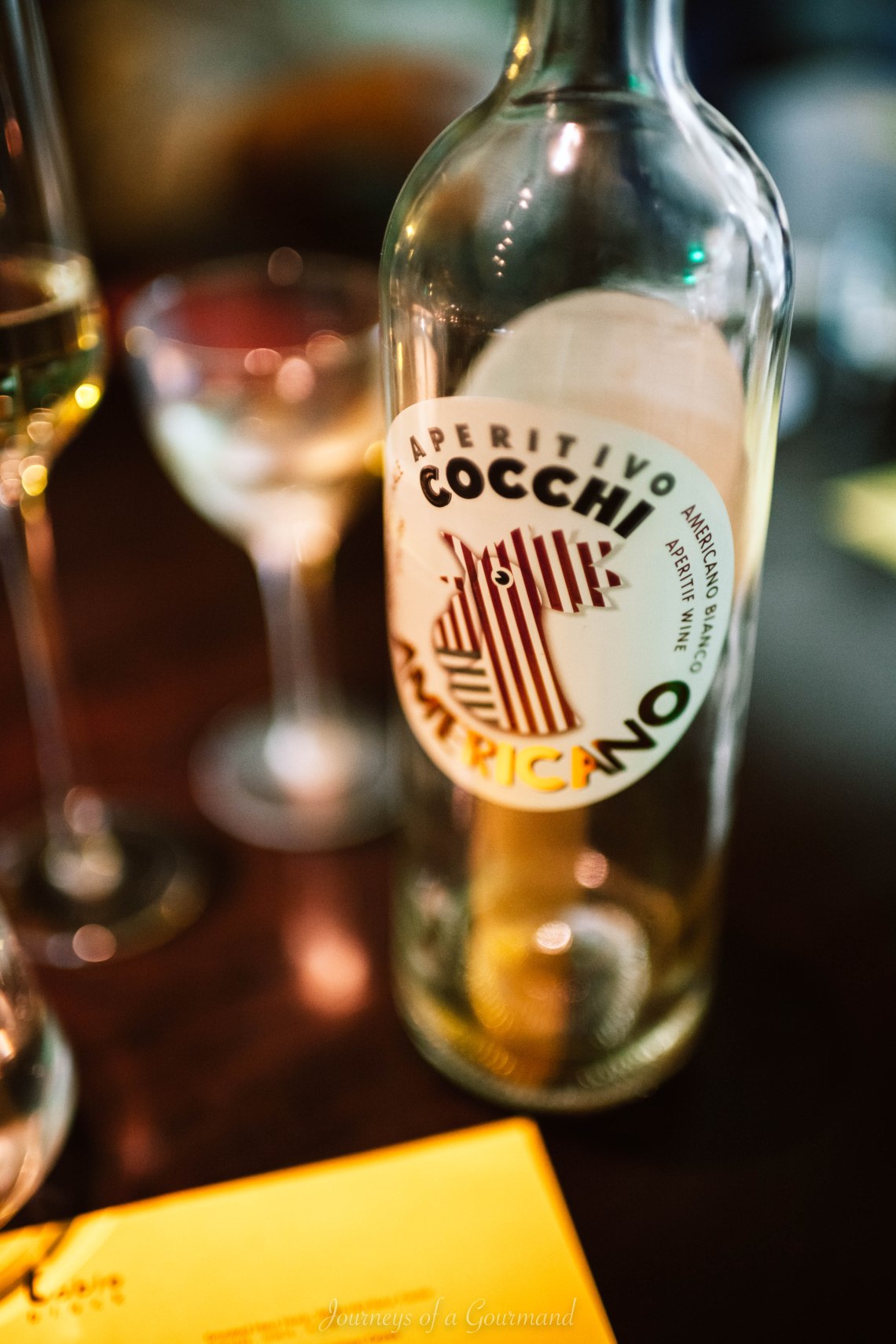 This eccentric and audacious approach to dessert-making yields mixed results. On the one hand, there is a somewhat perplexing combination of Buddha’s hand, tofu, tempeh, and basil that tastes vaguely alien. On the other, there is a slightly peculiar but remarkably balanced mélange of brown sugar meringue, chocolate mousse, and parsley purée — everything on this plate has found its happy place. 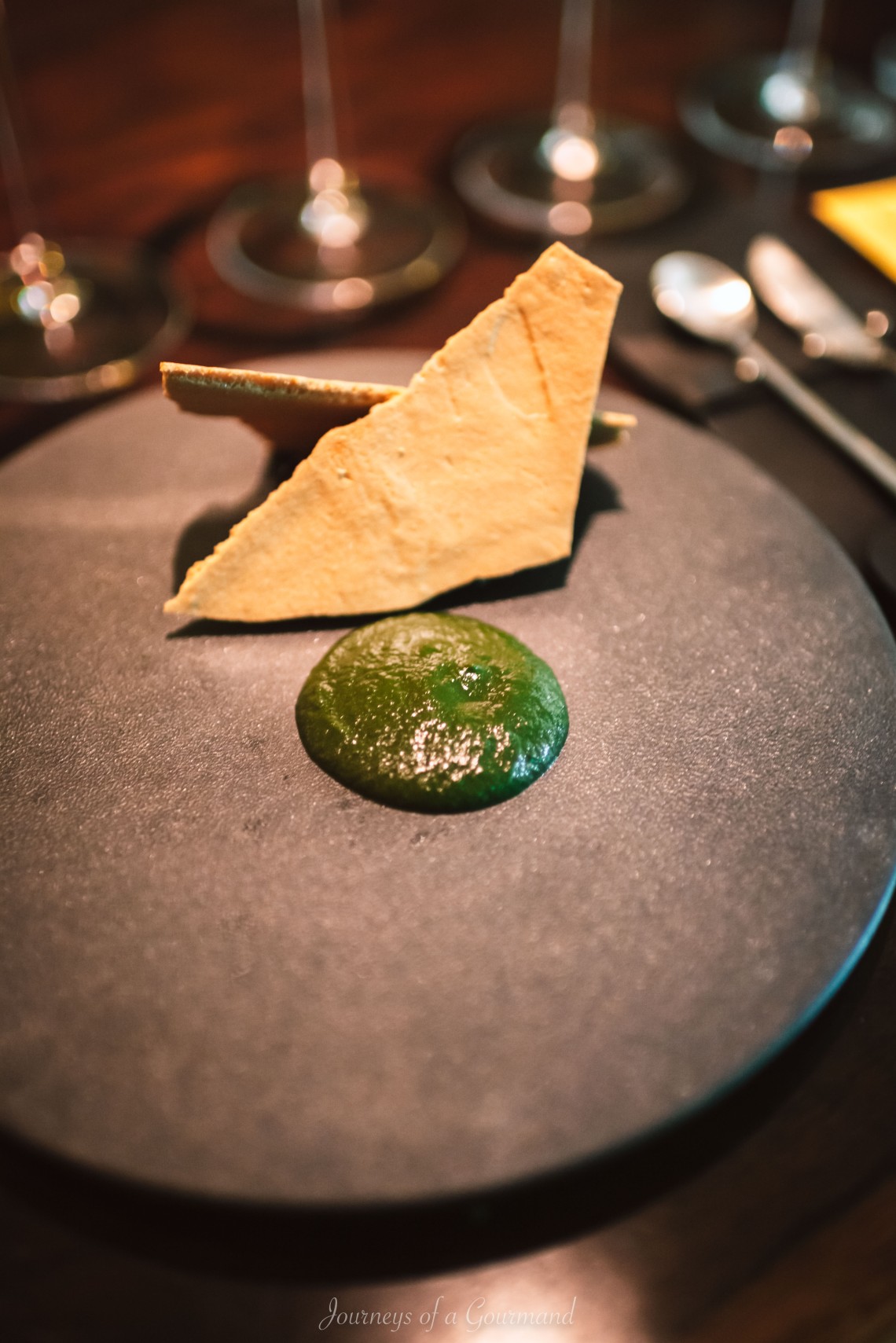 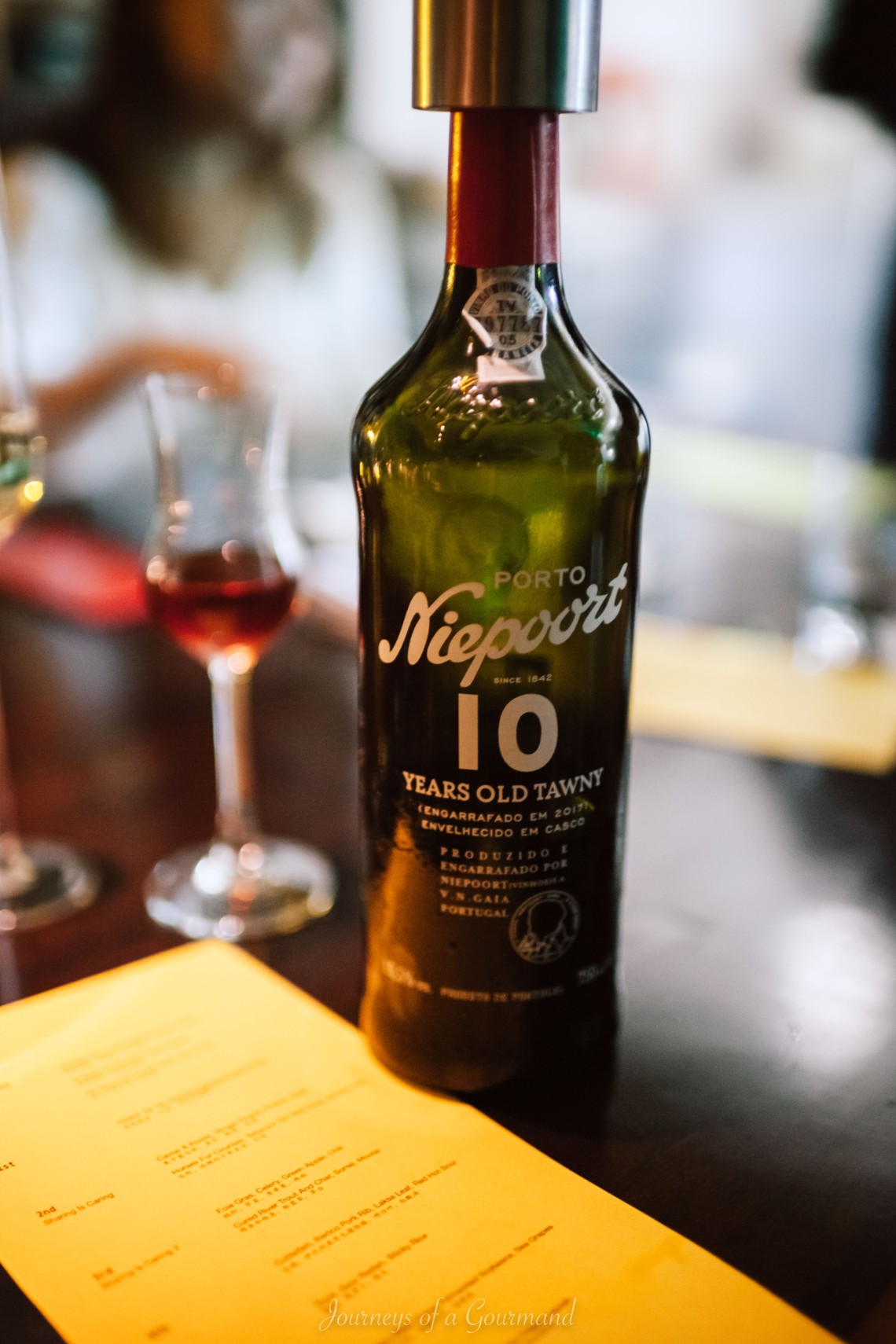