Perch by The Nest

Right from the start, we knew that Botanik wasn’t going to last: the open-air restaurant perched on the rooftop of The Plump Oyster in Tianzifang clearly operated at the tender mercy of the elements. Yet none of us really expected that it would be gone before summer has even ended — or that it would disappear quite so thoroughly. In late July, Chef Elijah Holland and his team abruptly announced that they were leaving Shanghai behind and closing the restaurant for good, after a final service on September 1st. 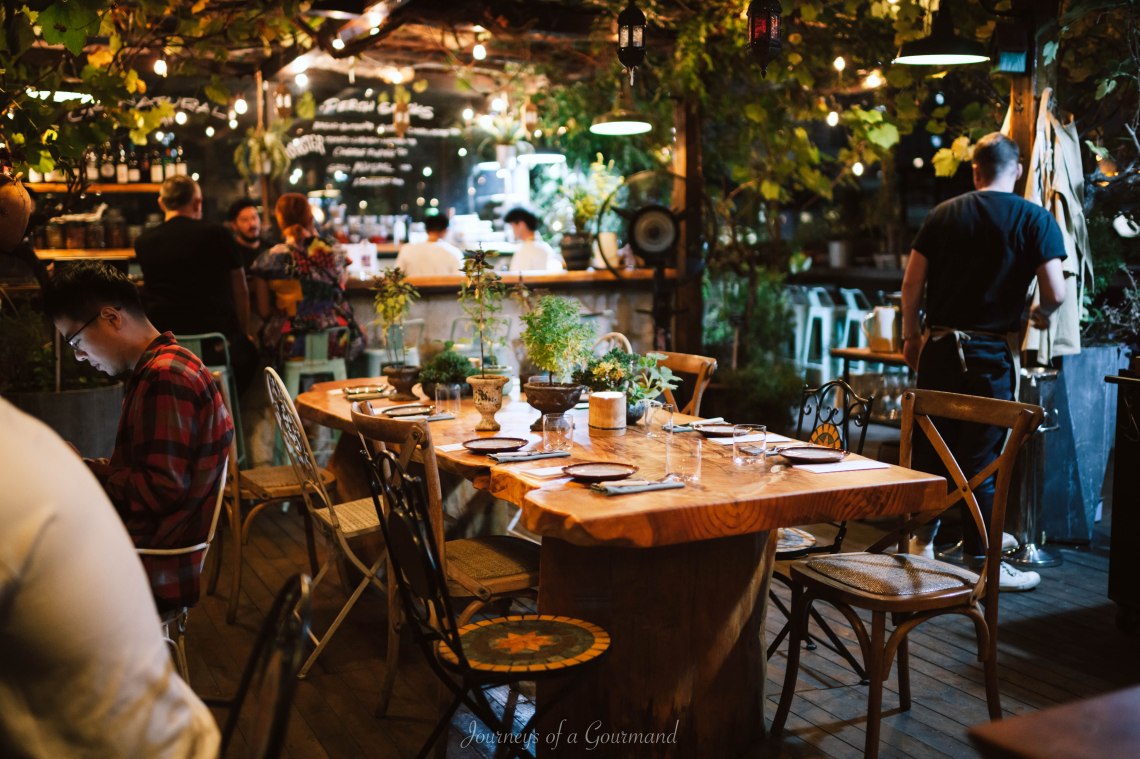 Thankfully, the dreamy terrace didn’t sit idle for long. Not even two weeks after the Botanik team vacated their herb-filled garden, The Nest group came along and took over the rooftop haven — rebranded Plump Garden — with a new concept, aptly named Perch by The Nest. Commanding the new kitchen crew is The Nest’s own Mr. Freddy Raoult, who is using this space to show off a creative streak previously unseen from his other operations (The Nest, Cannery, and Rye & Co.). 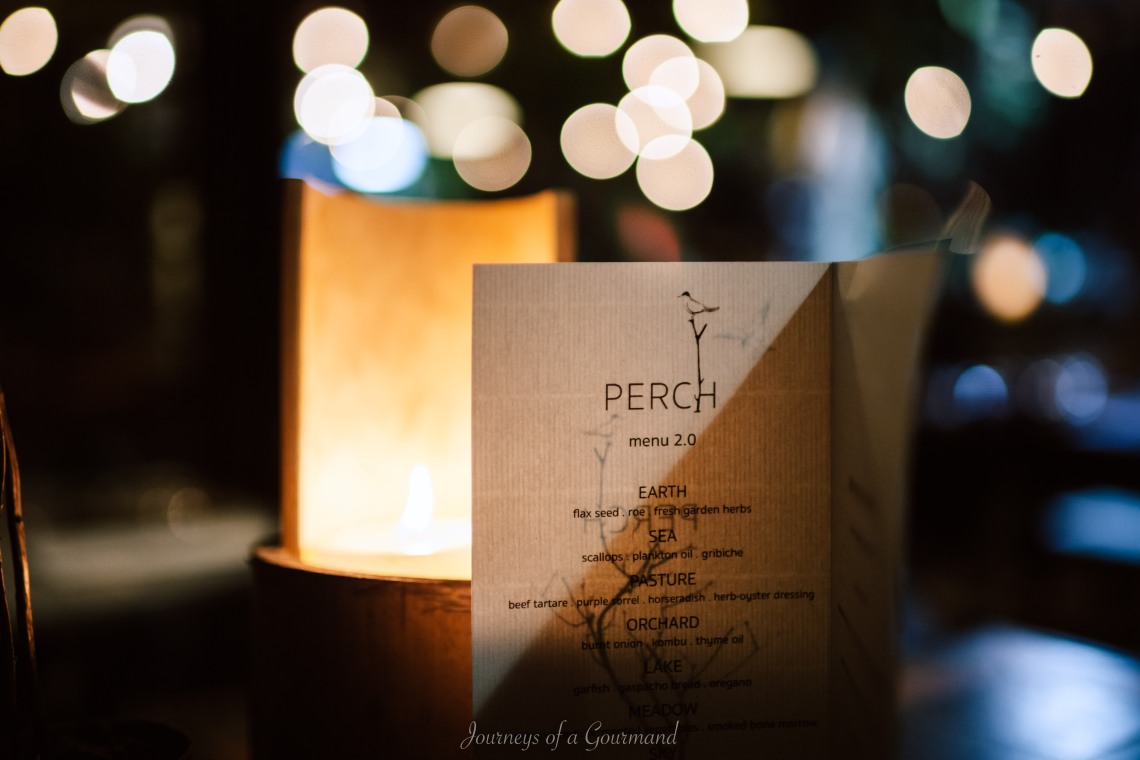 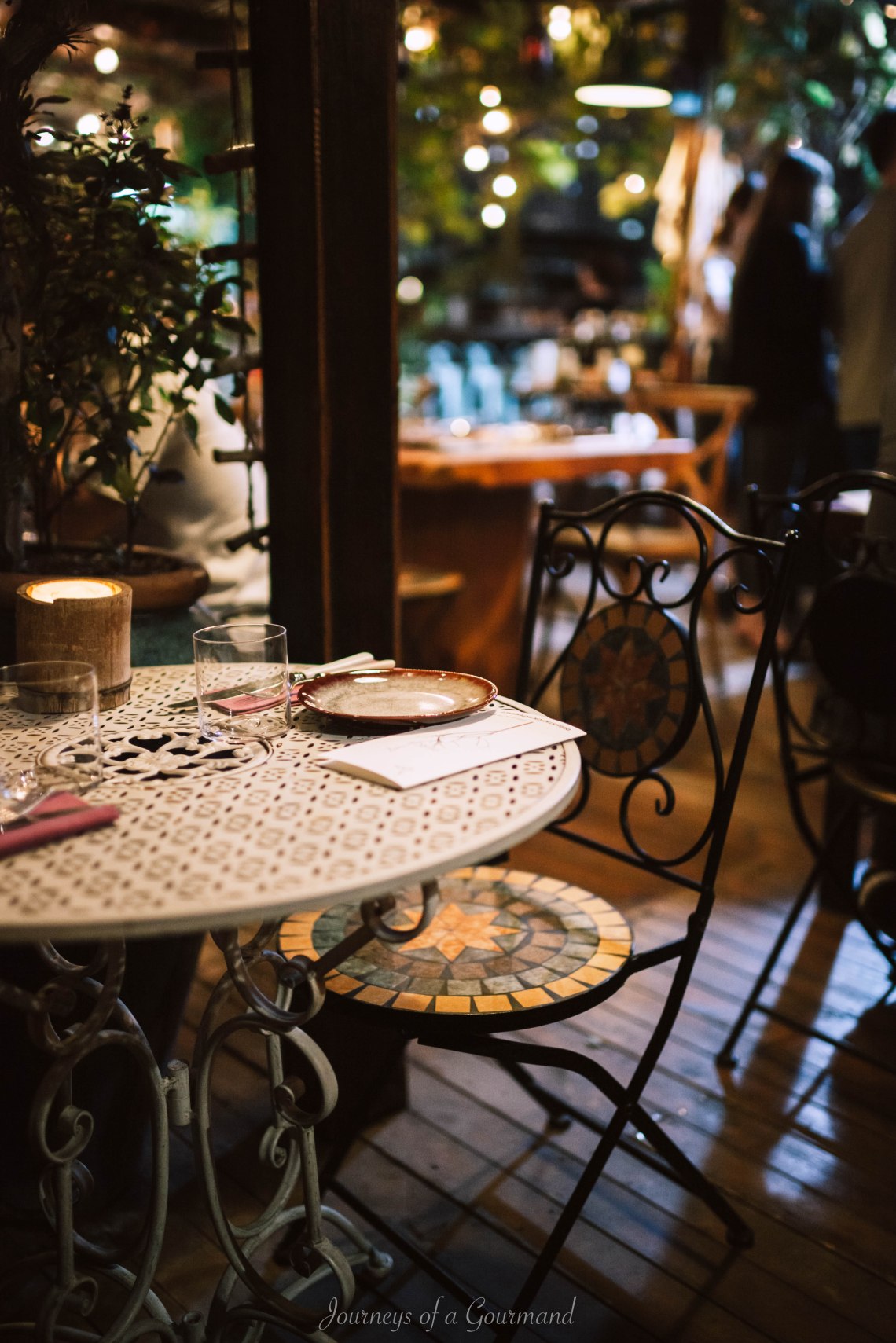 At first glance, not much has changed. The fairytale-like garden looks much like it always has, an urban oasis shrouded from the clamor of city life by walls of lush herbs. Nestled within its dim, romantic alcoves are the same mismatched tables and seats from before. Yet the experience is new altogether, for Mr. Raoult has brought an entirely different sort of cooking to this familiar setting. 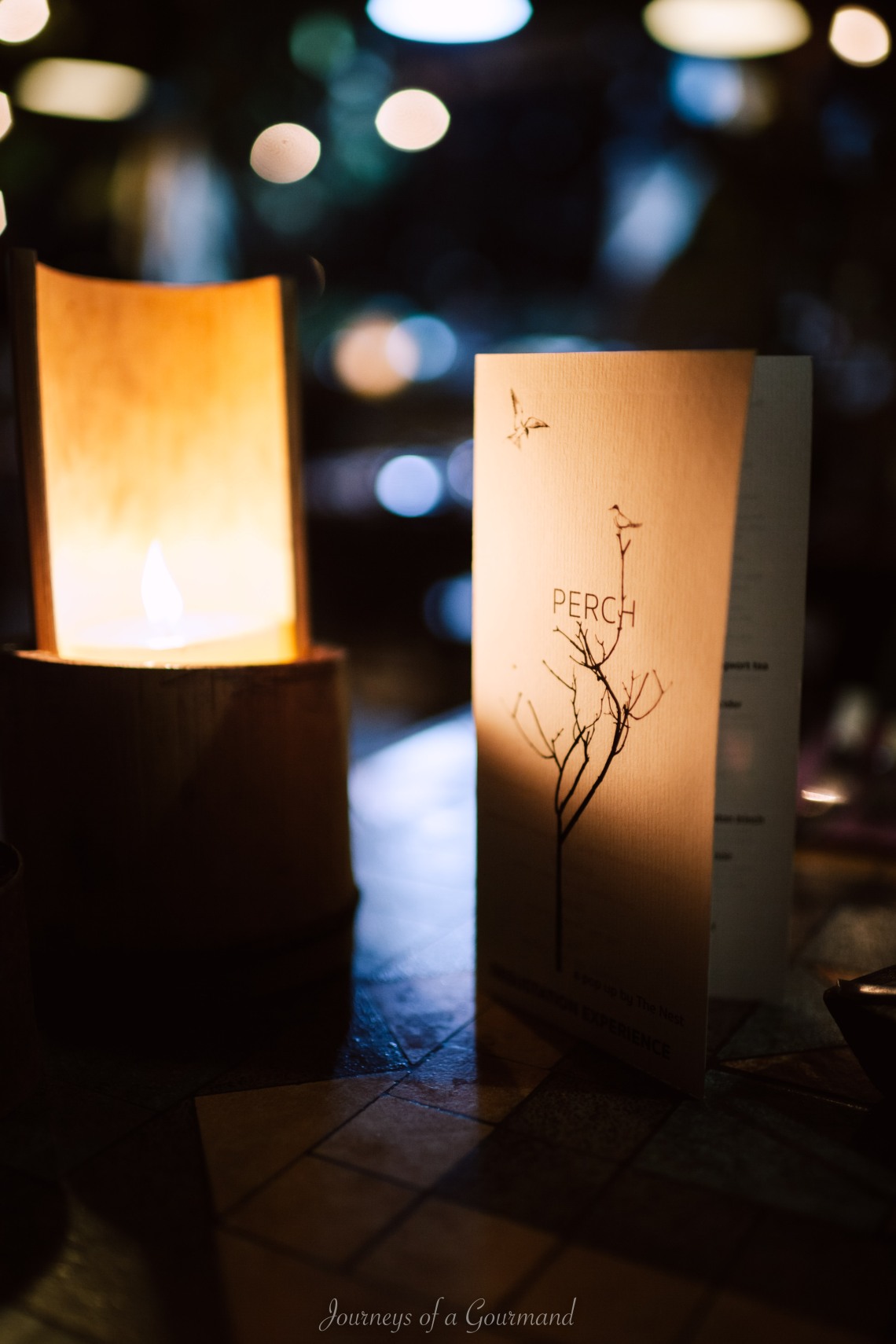 Dinner at Botanik was a lesson that touched on botany, locavorism, and some of the finer points of foraging, a test in both curiosity and patience; I left the restaurant with my stomach full and my head fuller. An evening at Perch is, more than anything else, just a very good time. Mr. Raoult’s 10-course menu seems to be designed with pleasure at the forefront of his mind. His plates are meticulously composed and far from simplistic, yet remarkably easy to like. 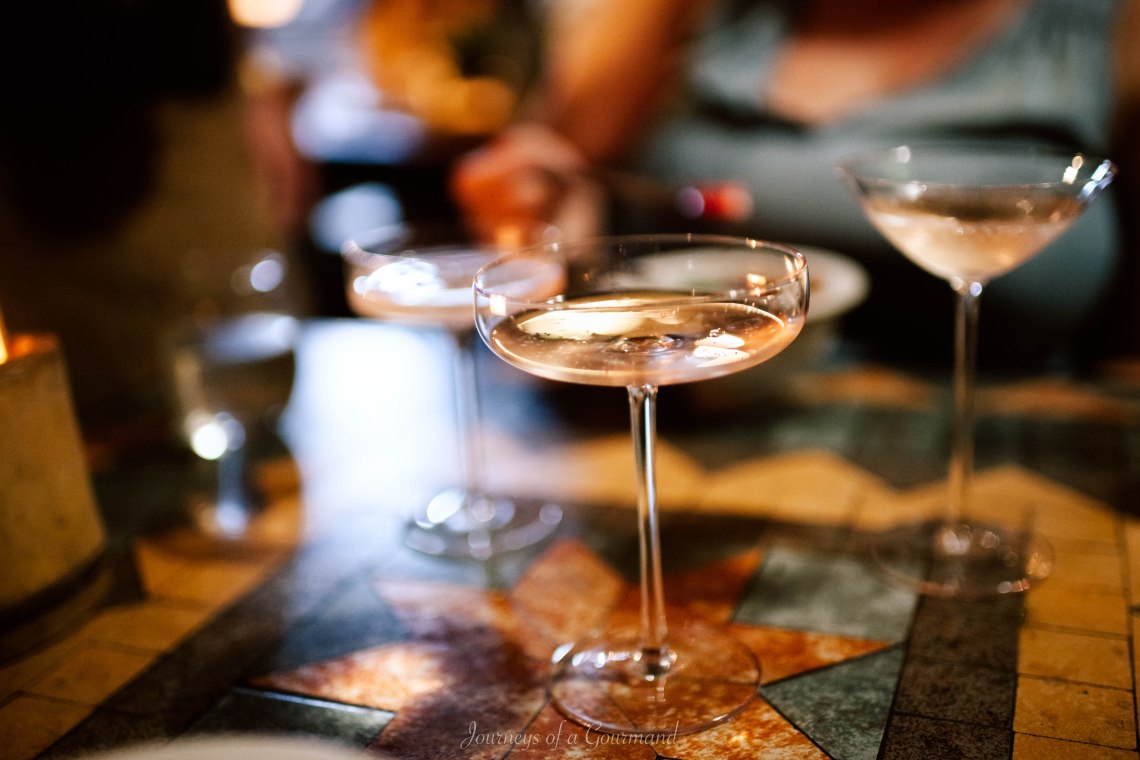 His opening salvo sees crunchy flax seed crackers heavily laden with sea urchin, salmon roe, confit tomato, and a fleck of cream cheese; the initial acidity is promptly mellowed with seafood sweetness and a fugitive tomato richness, and lightened with a waft of herbs. It is probably no accident that this single bite manages to awaken every taste bud. 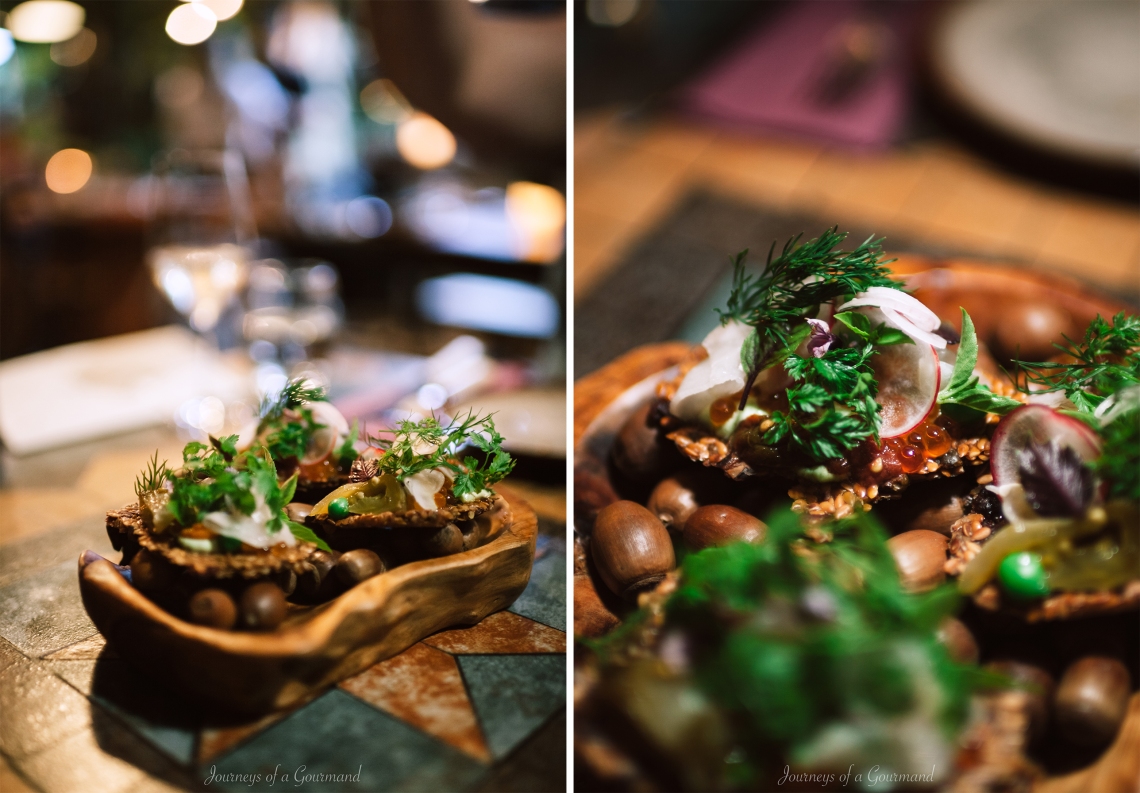 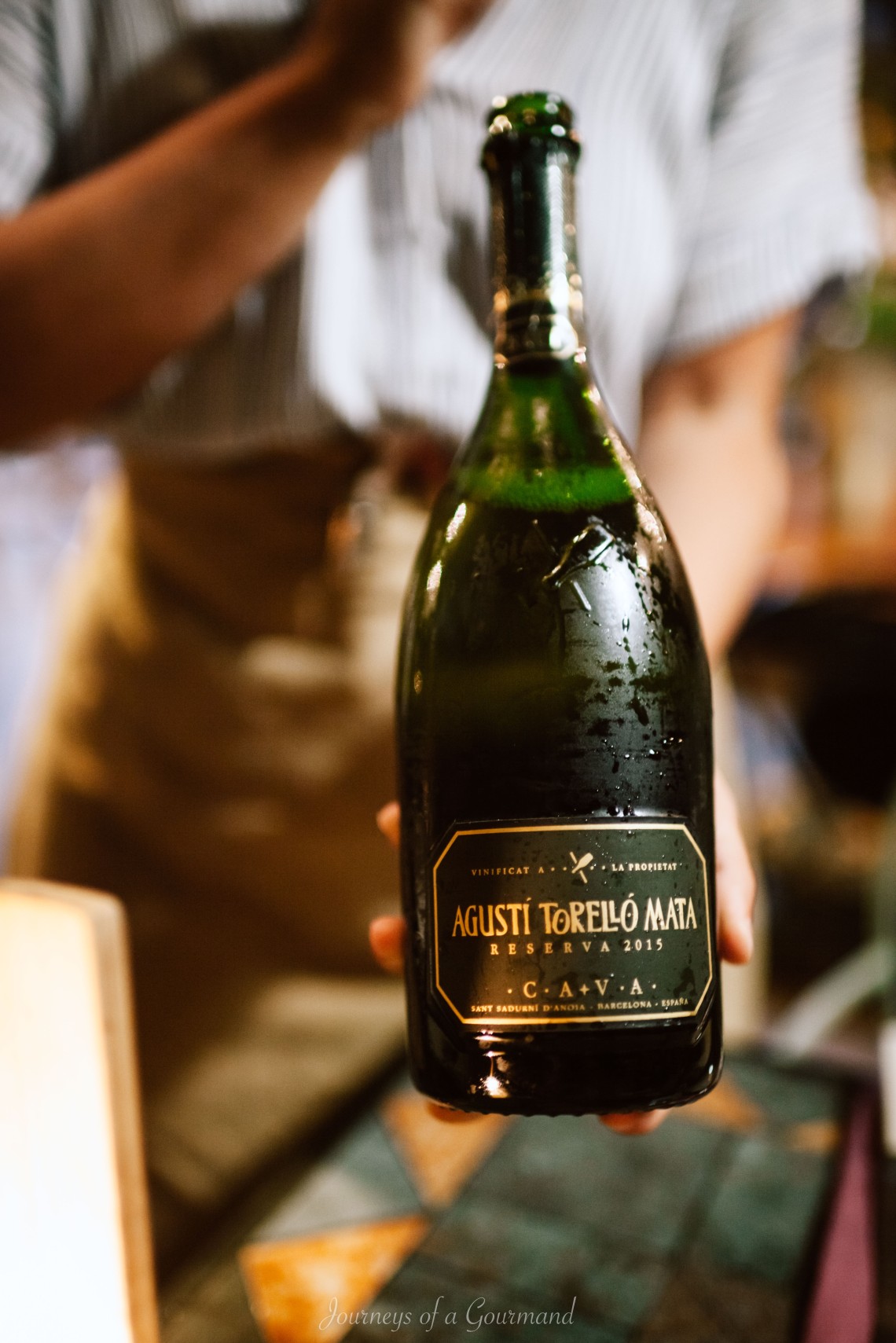 Pearlescent chunks of raw scallop is elegantly equipped with dill oil for freshness, crispy fish scale for texture, and an herb-flecked sauce gribiche that brings the sweet scallop into focus; each bite is so incandescent and full of spirit that everything seems to glow from the inside. A pristine beef tartare is perked up with just enough salt and pepper to register. You wrap it in a sheet of purple sorrel like a taco, and drag it through an arugula pesto that lends both creaminess and verdant energy. Three courses in, and I was already plotting my next visit. 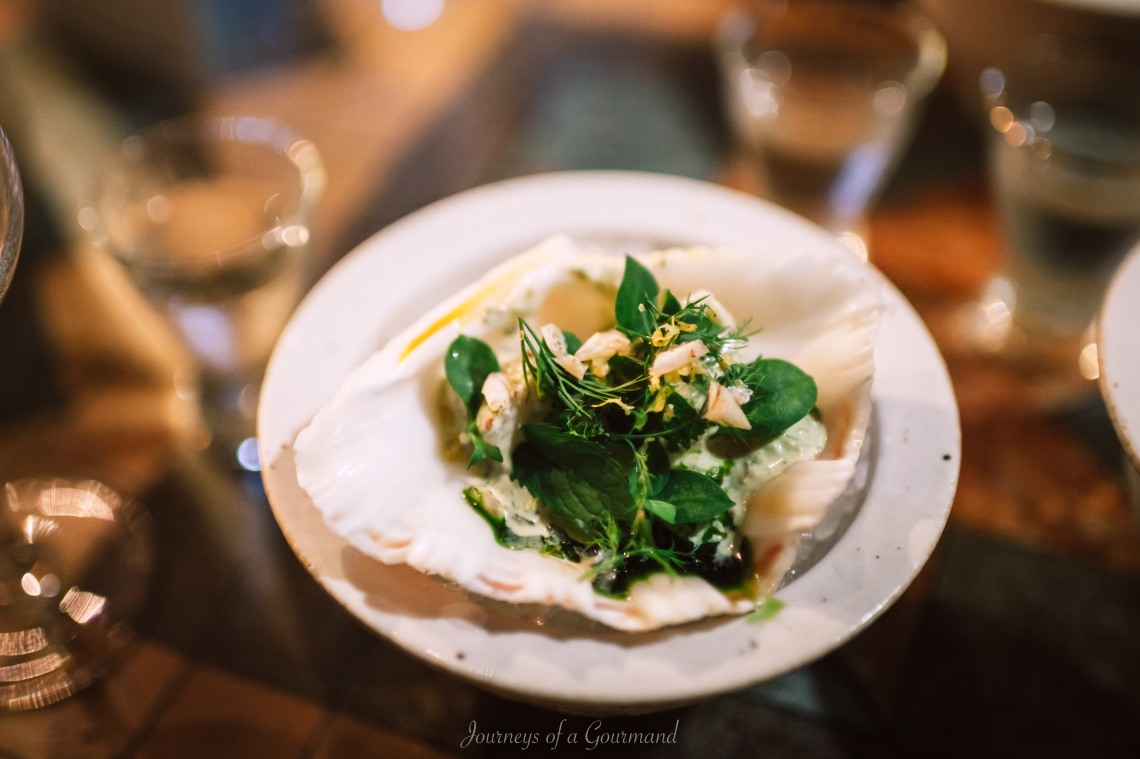 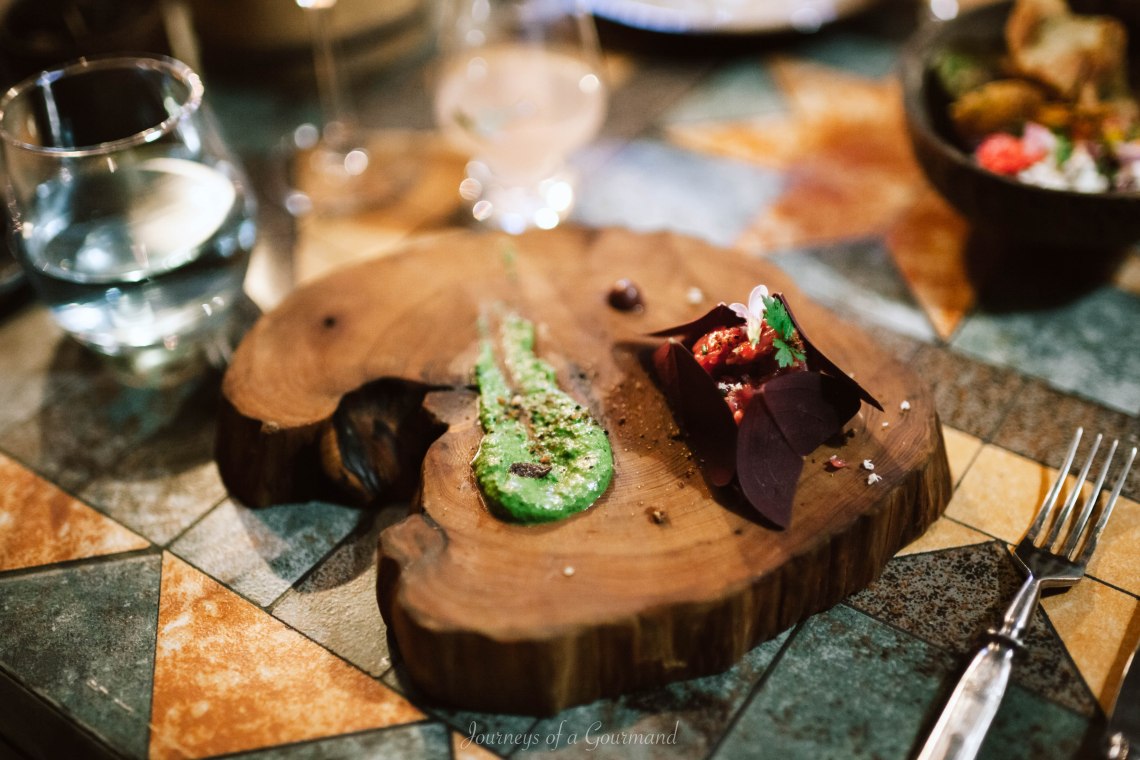 Accompanying this remarkable menu is the most intelligent beverage pairing I’ve seen in Shanghai, capable of taking Mr. Raoult’s cooking to new and dazzling heights. The aforementioned scallop is served with a smooth sake that draws out its ocean sweetness in gentle swirls and flourishes. The next course, a darkly pungent onion soup, is paired with an ice cider, the apple equivalent of ice wine. The soup gets its savory depth from the requisite caramelized onion, but also from the addition of miso and kombu, with texture supplied by crunchy onion and a surprise appearance of sago balls. On its own, it is musky, powerful, and much more than the sum of its parts; with a sip of ice cider, everything comes alive. 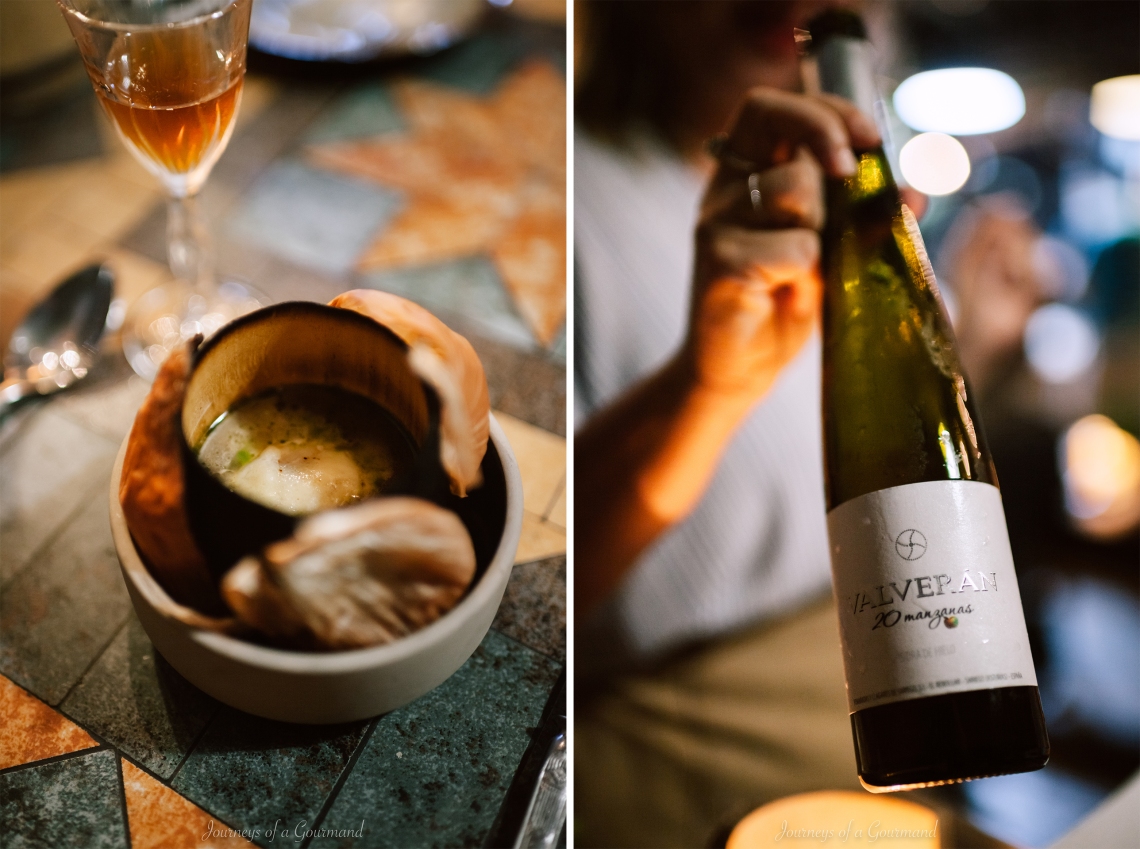 Mr. Raoult is a French national and a French-trained chef, yet the onion soup is the closest his menu comes to France. More apparent across the dinner is the strong Scandinavian cadence born out of the decade he spent cooking in Helsinki, writ large in the high notes of thrumming acidity that run through most everything like a rhythm track. 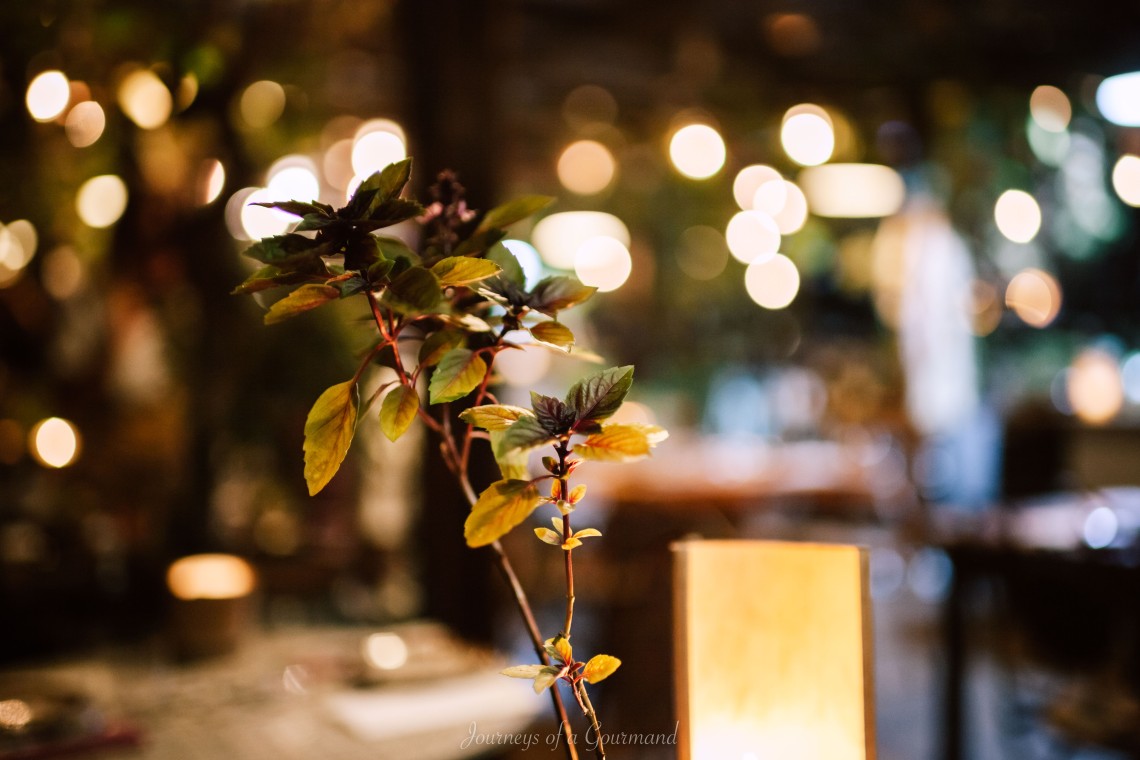 The enviable garden that Perch inherited from Botanik — more than 150 kinds of edible plants! — is put to good use, accenting the menu with spirit and verve. Mr. Raoult also makes excellent use of The Nest’s Nordic bakery Rye & Co., which provides the superb sourdough that opens the meal alongside a heady black garlic butter. 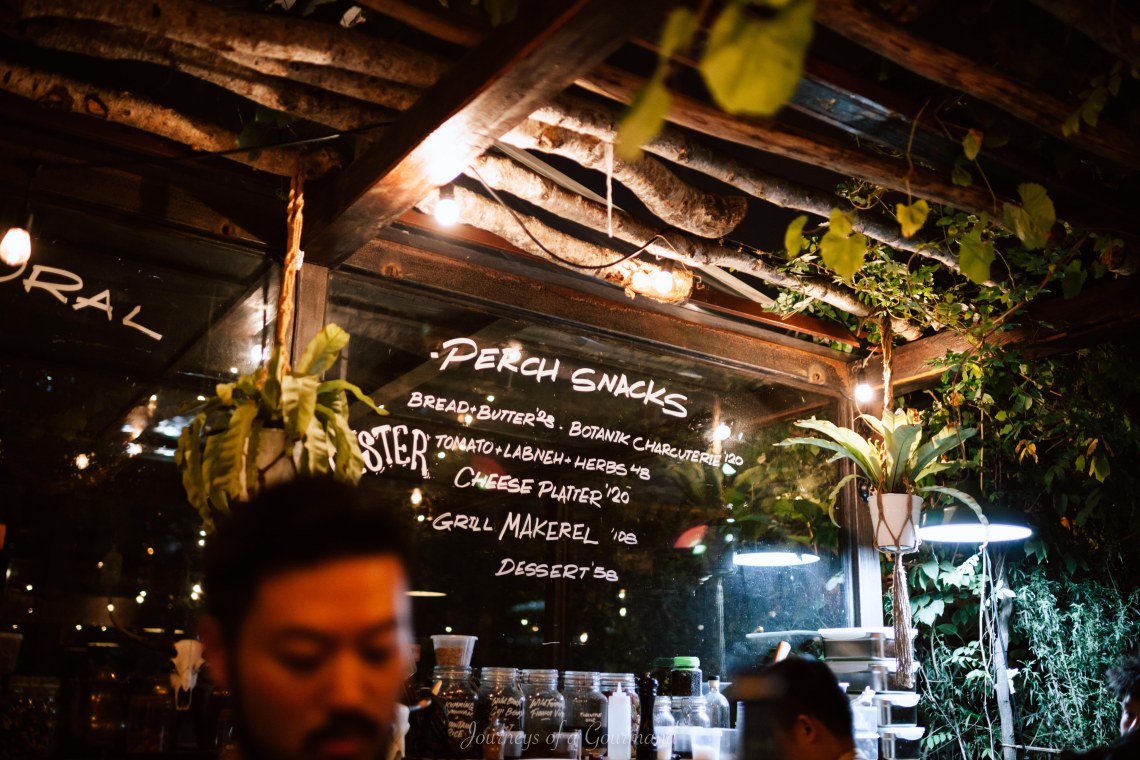 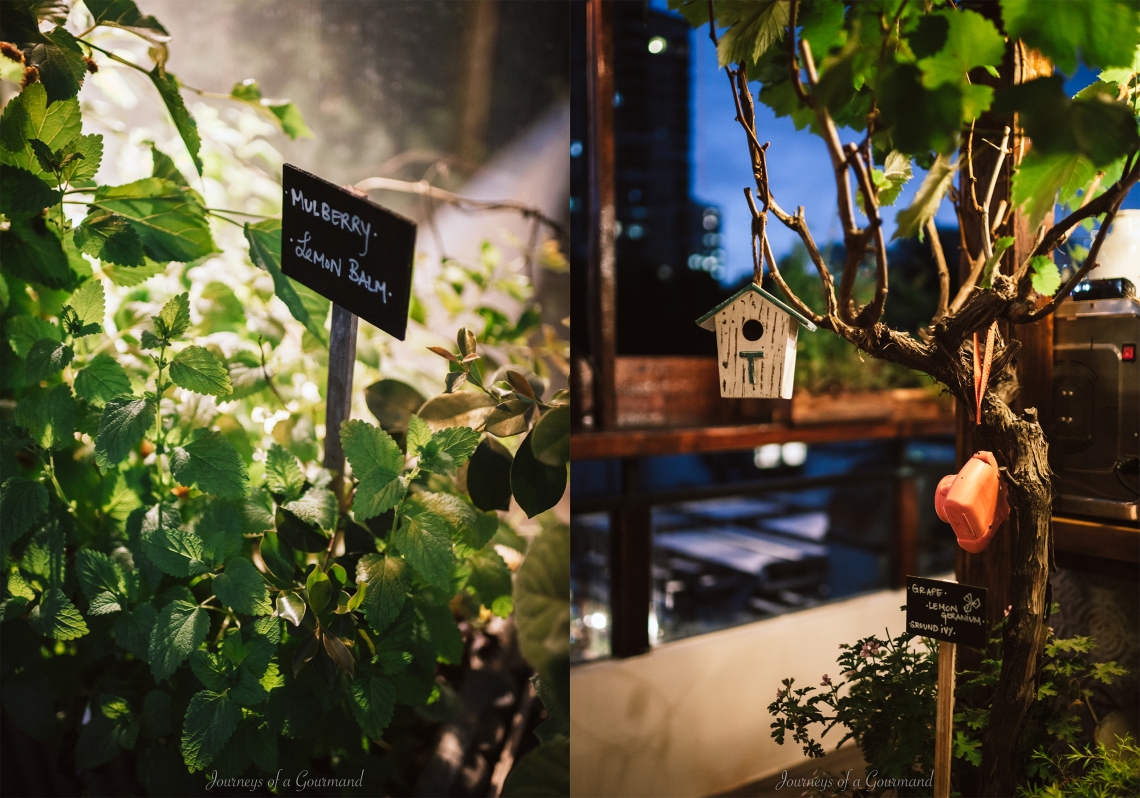 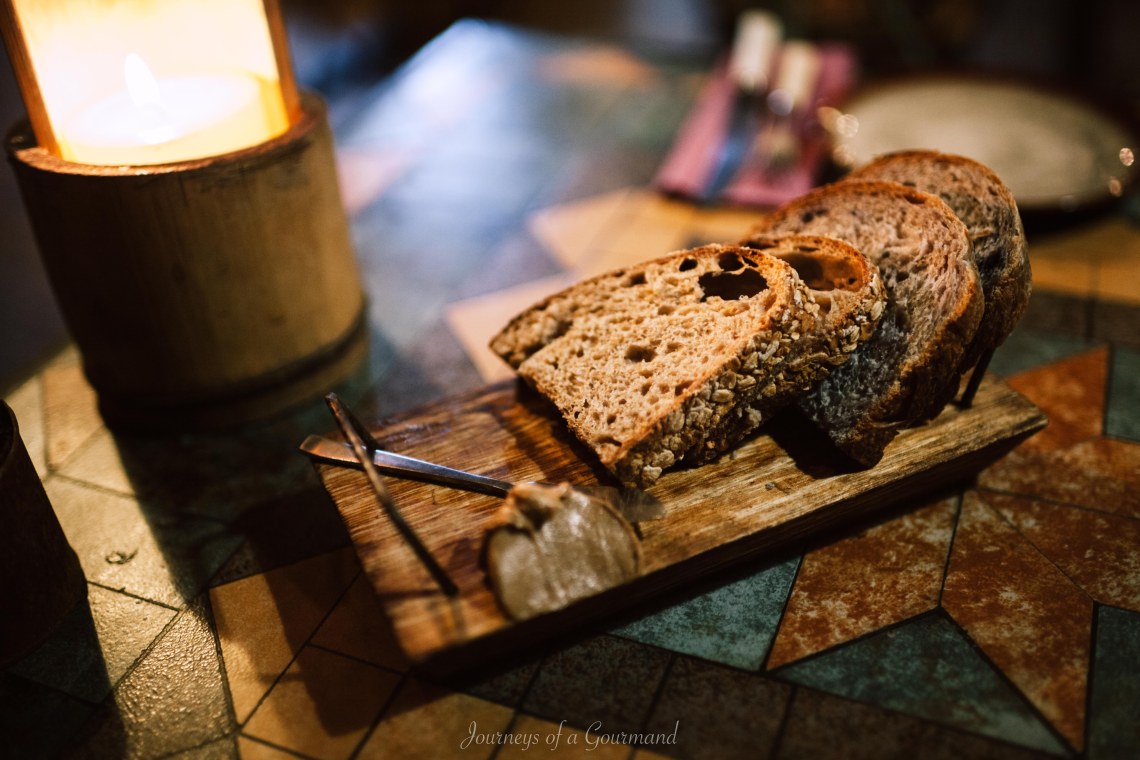 Bread also acts as a steady conduit of flavor in an open-faced garfish sandwich: toasted on one side for an ultra-crisp bottom, while the other side is dipped three-quarters of the way into a vividly orange gazpacho, and then topped with a fillet of blowtorched garfish. This is the most restrained dish of the evening, yet its intricacies grow on you slowly as the tomato sweetness accumulates with each bite, gathering tickles of heat along the way from tiny pinwheels of pickled green chili. 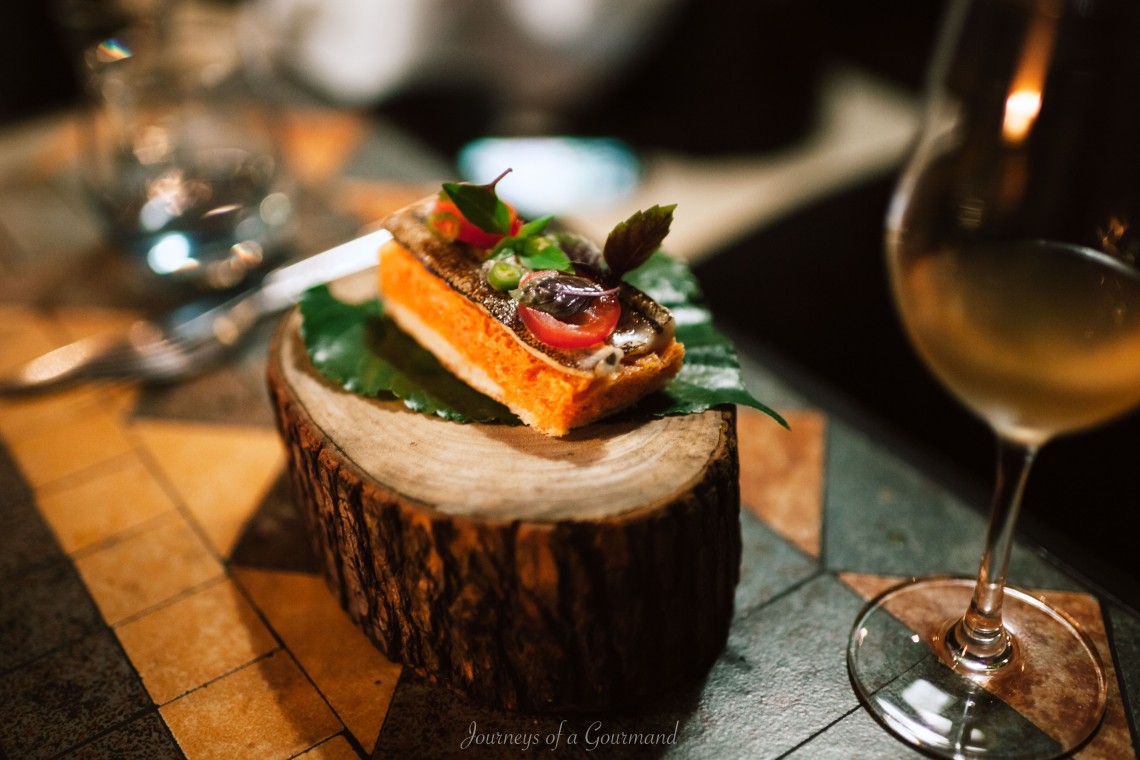 If you haven’t picked up on the Nordic bent yet, the next course would surely tip you off. Raw venison heart is enriched with warm bone marrow, and perked up with thin shavings of fermented carrot and celeriac; the whisper of smoke from the former and the lively tartness from the latter work together to tame the iron tang we expect from venison heart with riveting efficacy. 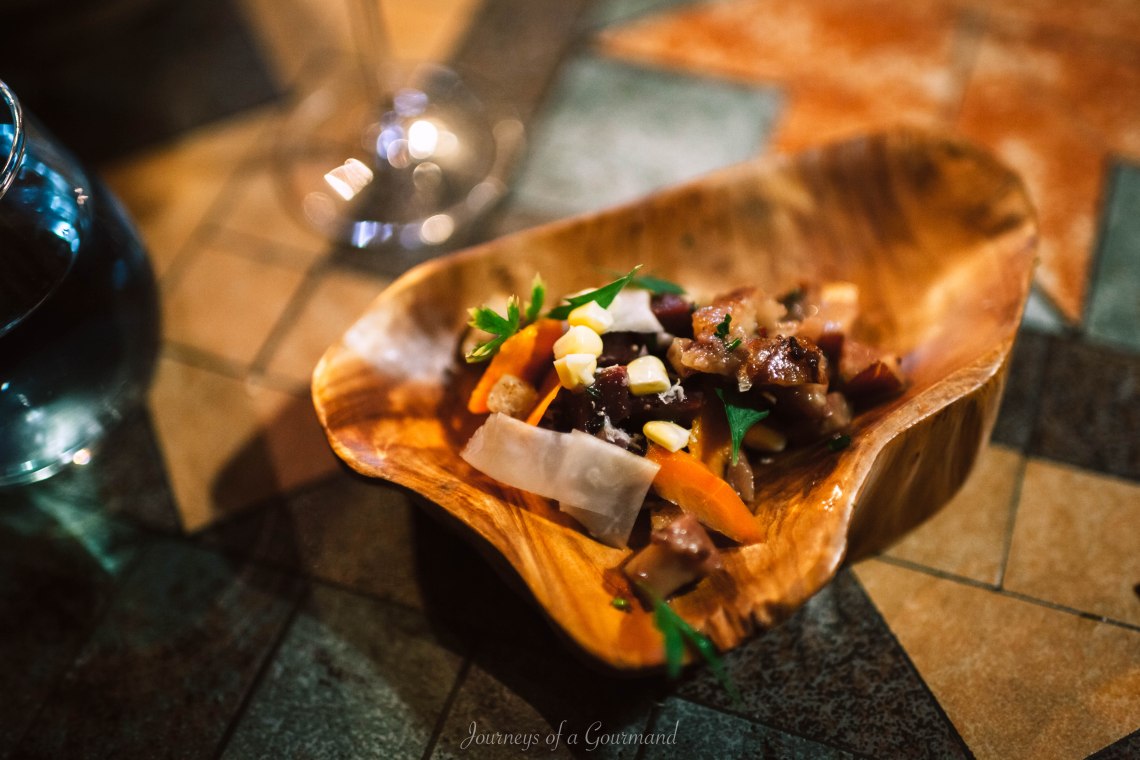 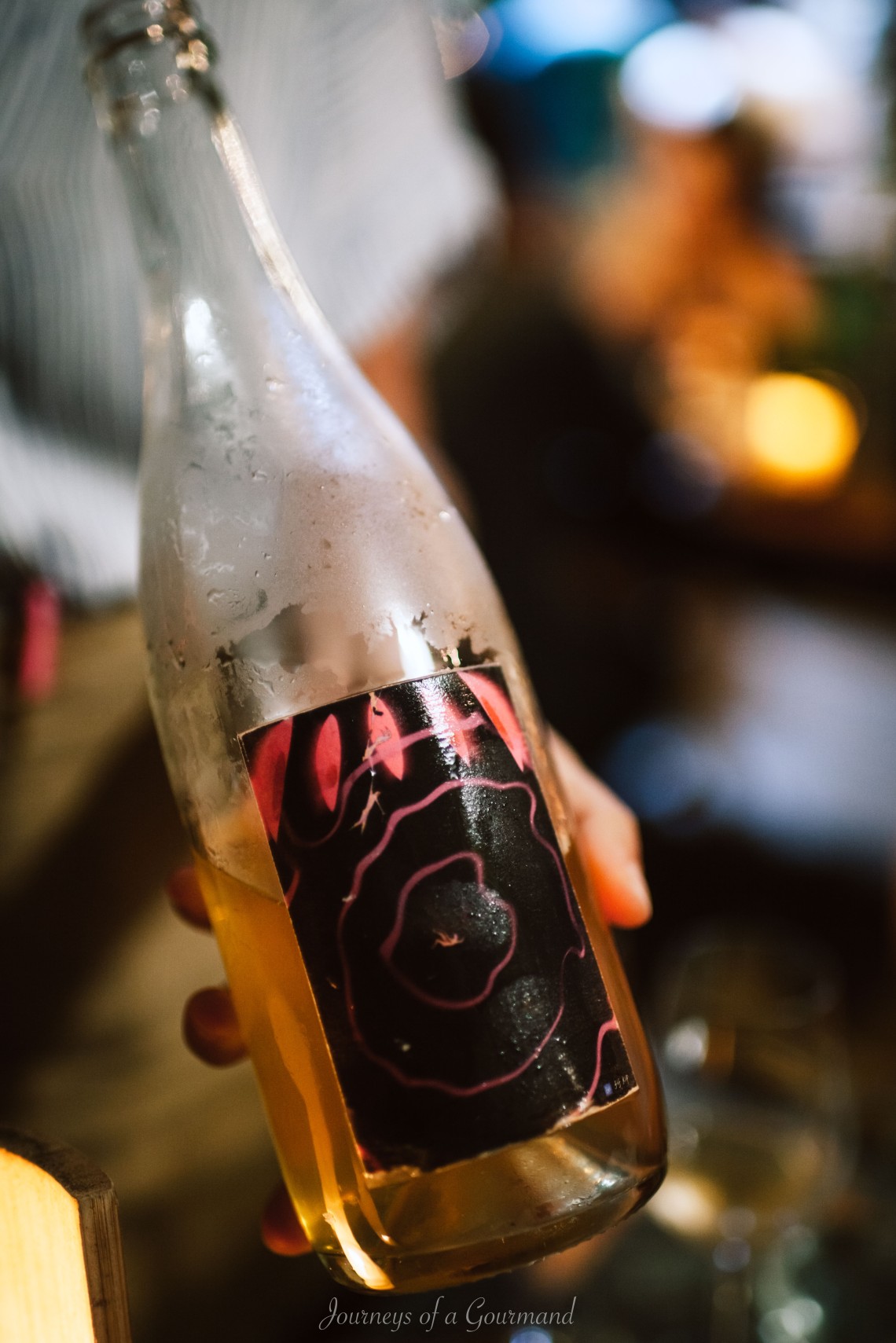 Such is the way that Mr. Raoult amazed us throughout the evening, cooking with a steady hand and an appealing sensibility, yet still managing to engage and at times surprise with the end results. His wood fire roasted pigeon doesn’t venture very far from the usual accomplices, yet working through the plate feels very much like following a treasure map, each bite a candle leading us deeper into the forest: first the unexpectedly mellow pigeon, accentuated with fermented celeriac purée and a streak of grassy, faintly bitter watercress; next, the glistening maitake mushroom that fills every crevice with its woody sigh; then finally, a punch of savory depth from the generous serving of black pudding underneath. 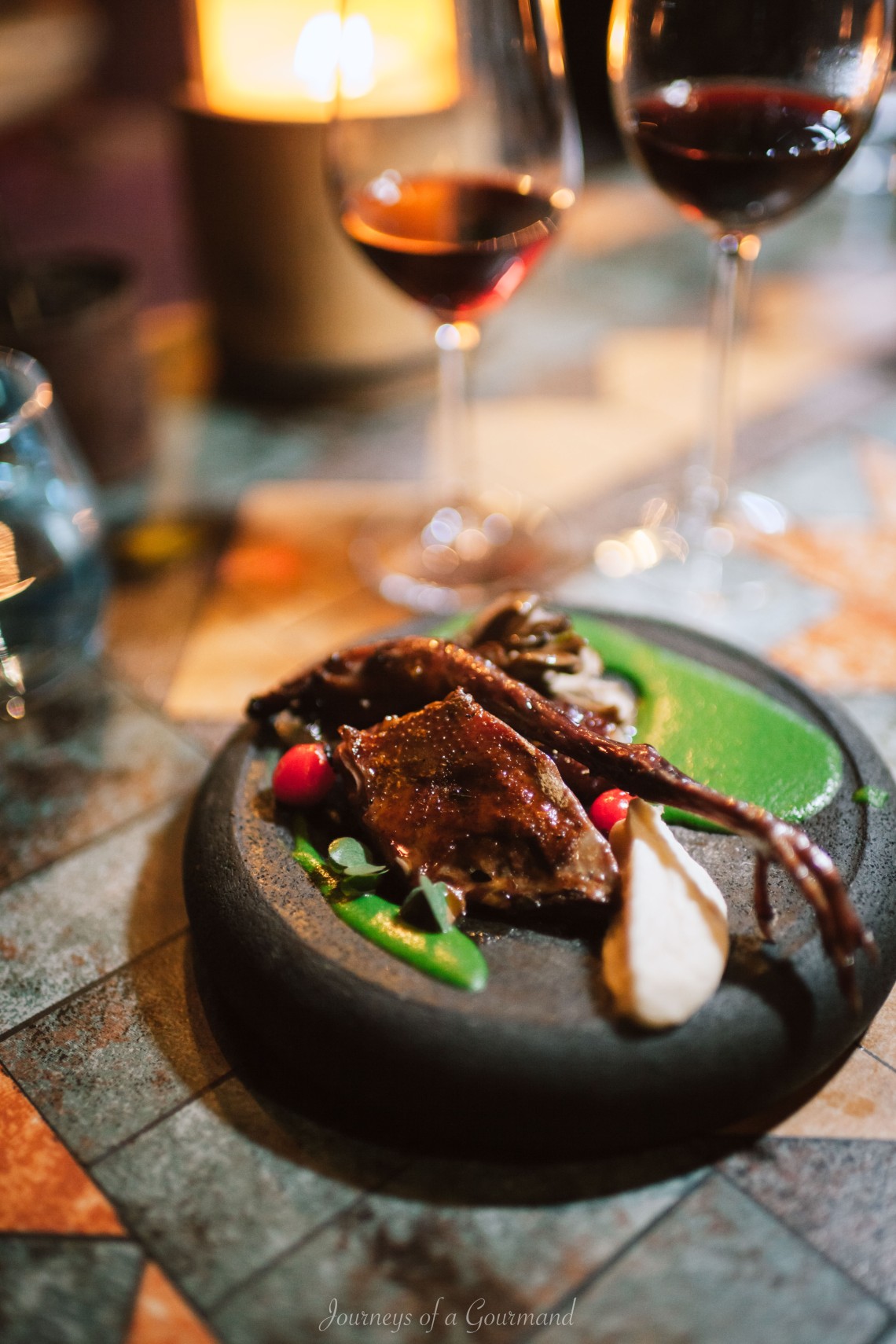 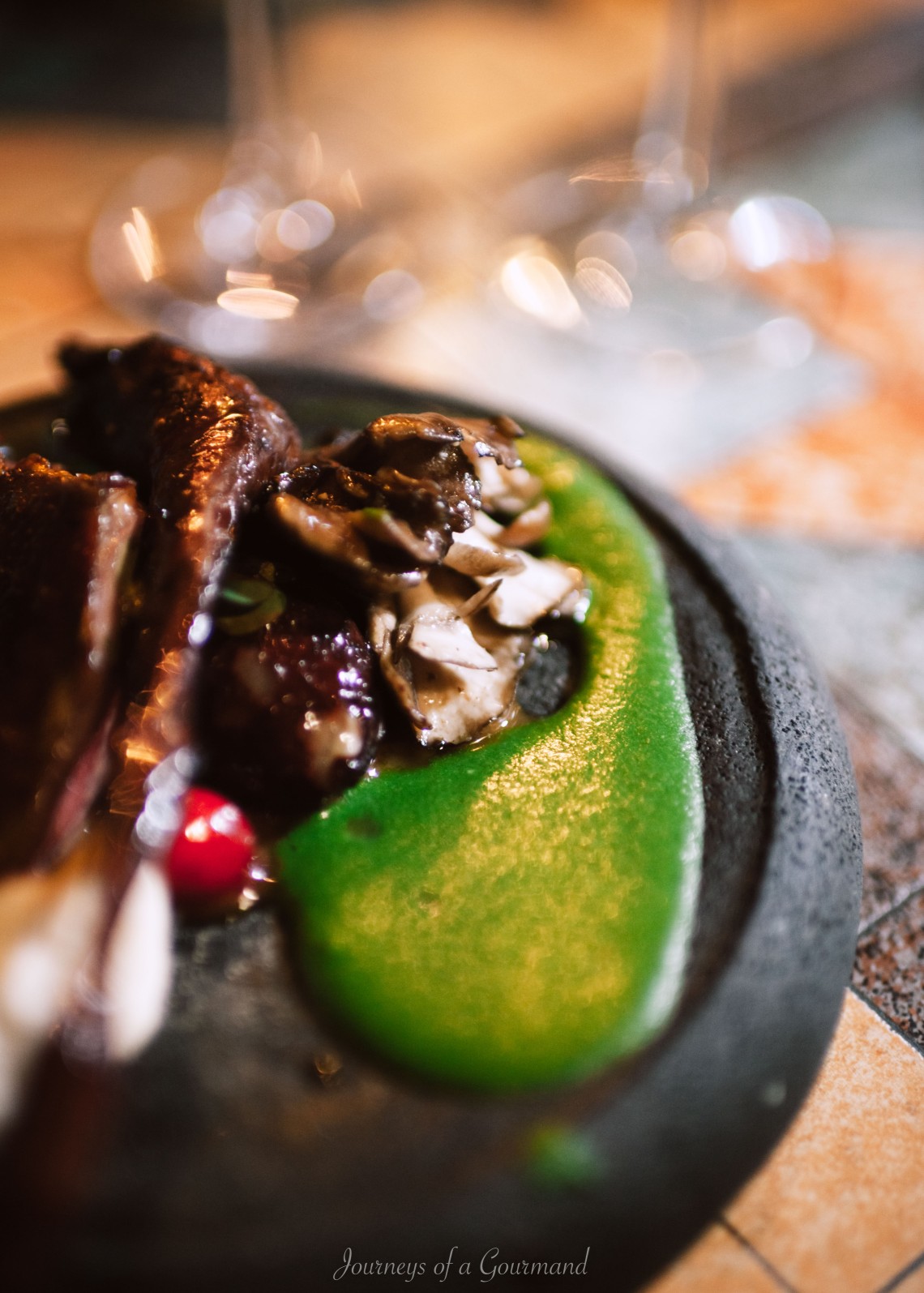 And here I must take another moment for the wine pairing — two for this course, because the team couldn’t come to a consensus (I suppose there are much worse ways to resolve a difference of opinion). The first, a juicy Cabernet Franc, is delightfully easy to drink and a highly suitable match for the pigeon. Yet our table unanimously favored the second: a Barbera-Bonarda from Emilia-Romagna, so full of spices and character that we all sat up straighter in our seats — a fearless wine for a big, bold dish. 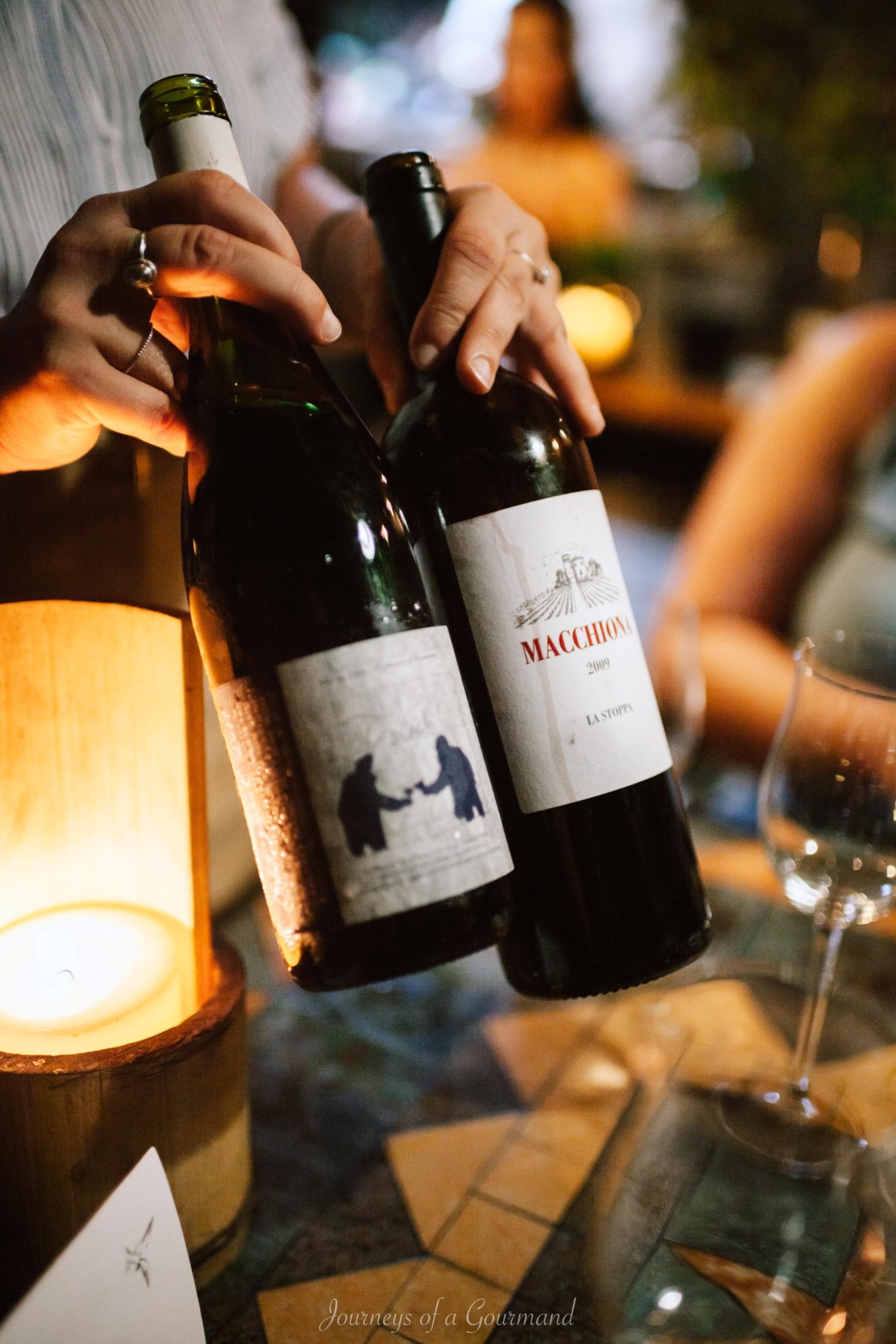 Our first dessert, a bowl of homemade yogurt stained red with shredded beetroot and four variations of raspberry (granita, vinegar, raspberry sugar, and fresh raspberries), comes with an unusual piece of advice: don’t stir it. And it is good advice, too, for otherwise the distinct layers of sweetness, sharpness, and sunny vibrance would be lost, or at least muted. 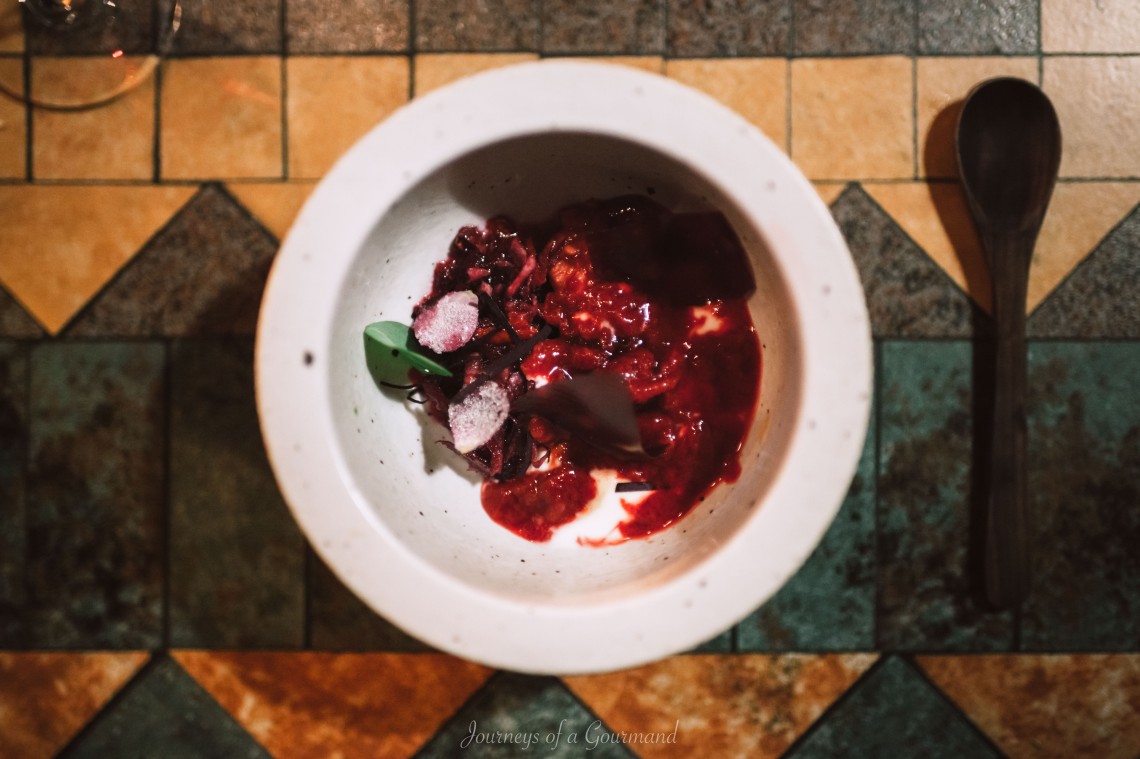 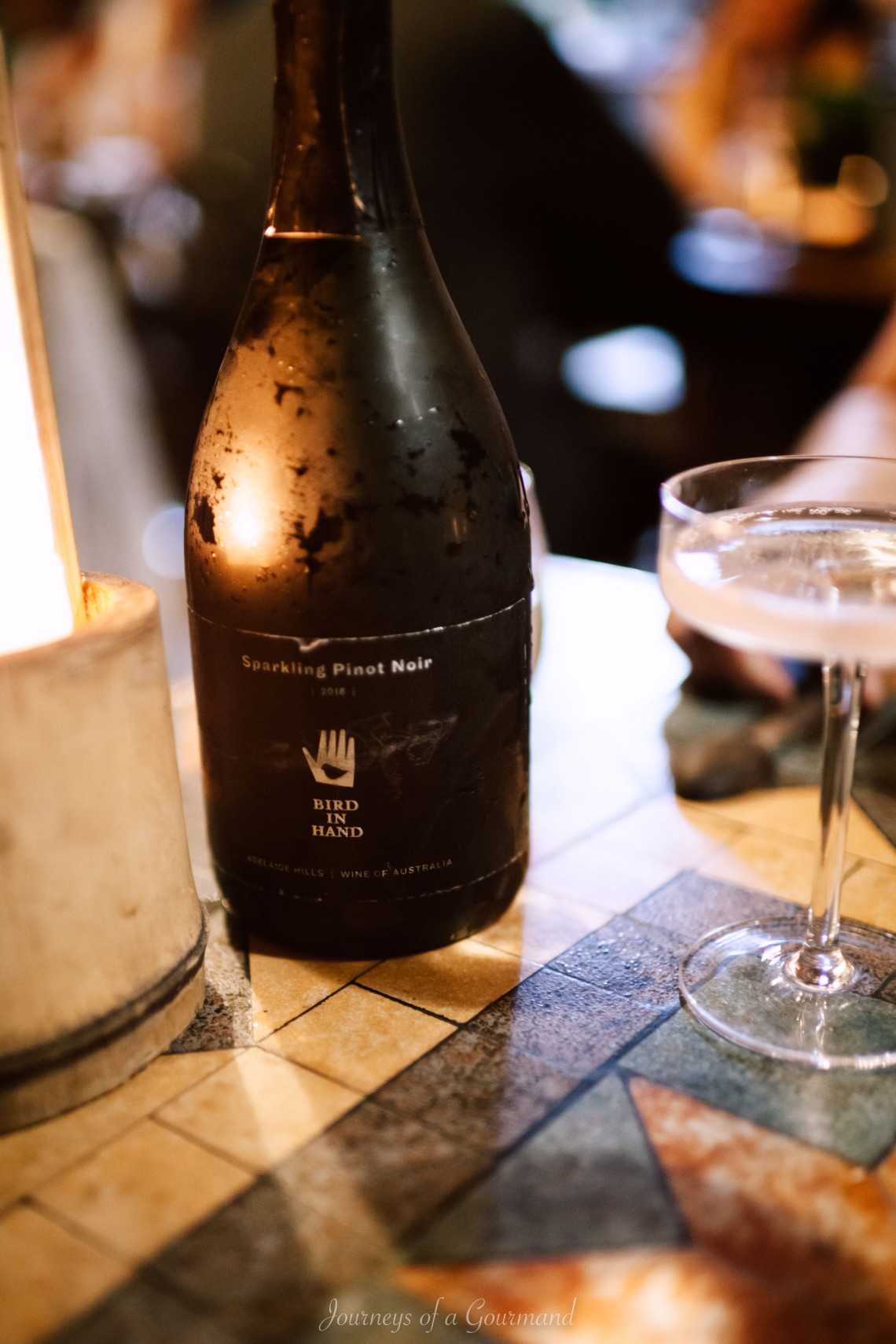 The next dessert is anything but muted: marigold tempura to be dipped in an egg nog that is rich, creamy, and very, very boozy. The tempura somehow brought the alcohol into vicious relief, so the egg nog turned out to be better suited for a shot than a dip. 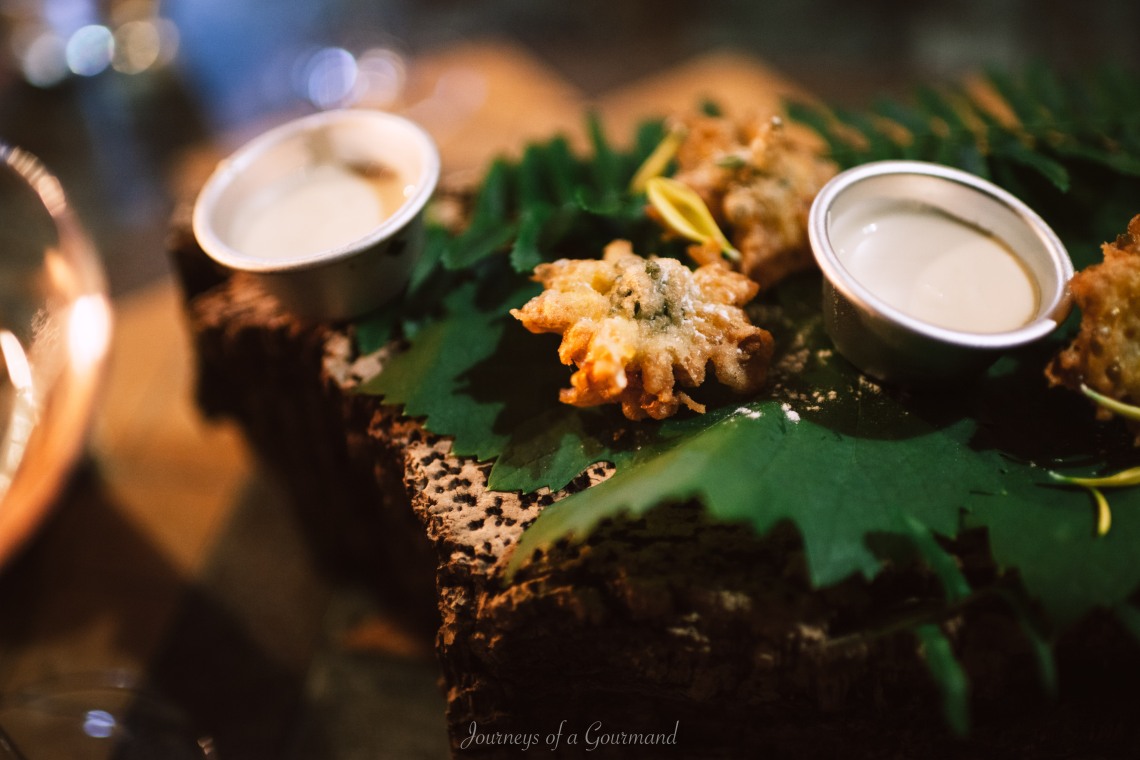 To our delight, the evening ended with one of the most finely tuned pairings on the menu: a chocolate stout served with a curiously moreish mix of oats, caramel, chocolate, and molasses, assembled into an intriguing interplay of textures. I’m not a beer drinker, yet this stout tastes so stunningly at home here that I can’t fathom the dessert without it. 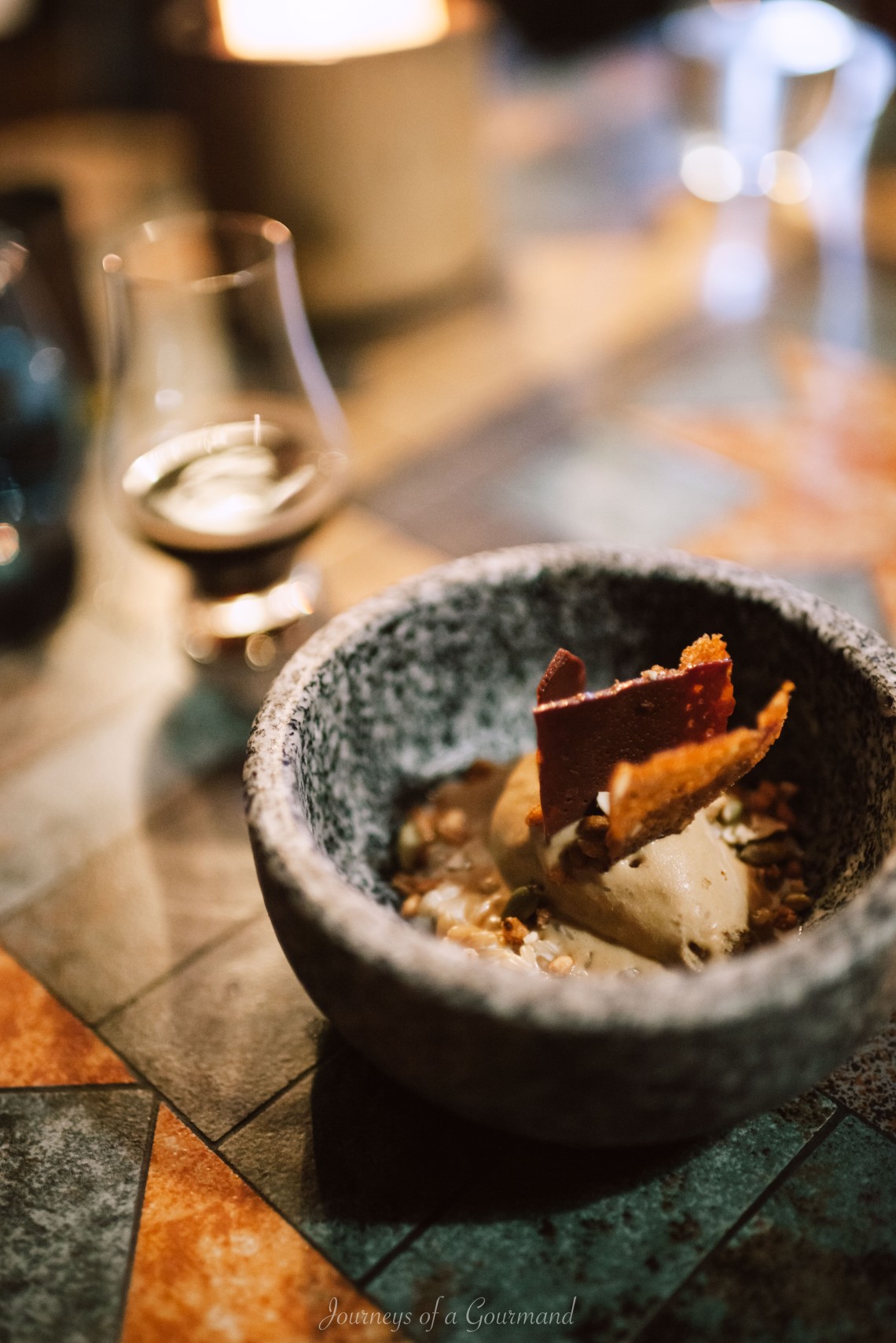 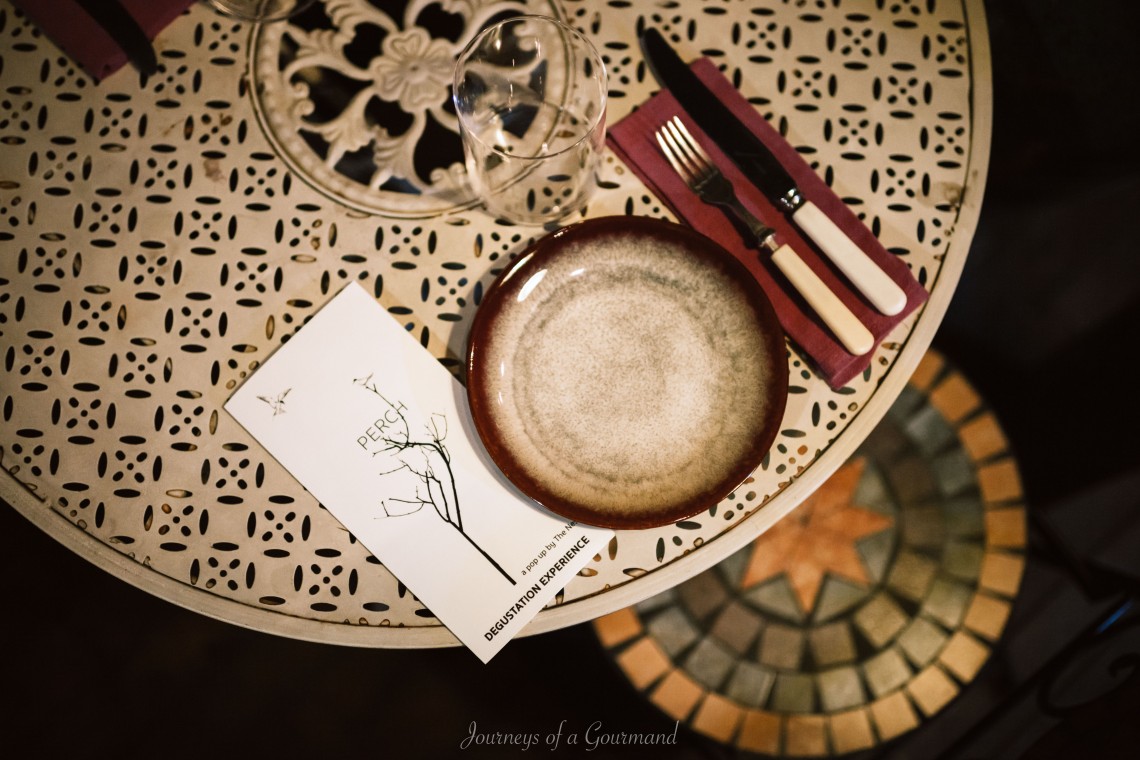